House of Usher 2013: What the Students Liked 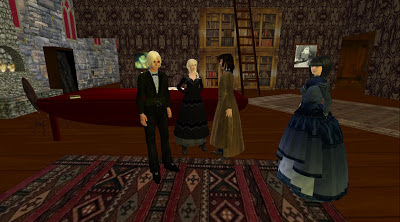 For what will most likely be my final teaching experience with virtual worlds, I tried to add depth as requested by the last group, in Spring 2011. Notably, I added more clues, plus a real-life scavenger hunt / mystery on campus. Second, I added a combat system and some dangers to the House of Usher.

I want to share the experiences and advice of the class this year, but I will do so in two posts.

First, what students had to say went well. Each bullet point comes from a different student.

As others with more support and energy than I have build virtual-worlds simulations, I hope this feedback will guide them. It was fun, but, frankly, too much work give how my job is structured. I doubt I would take on a project like this again, if I had to build it all from scratch.

Be that as it may, thanks to my actor-volunteers and students.