A Closer Look at Glitch, Reloaded 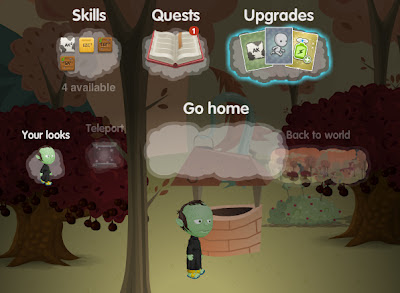 I will admit, in starting this post, that some of the material was probably in the pre-Beta Beta (or whatever the heck it was) that I played. But I'm liking the following aspects of Glitch. I'm assembling ideas for a future VWER meeting in which we actively plan beyond Second Life and OpenSim, to the features of the virtual worlds we educators would design.  My last two trips to Glitch have been far better than what I experienced last year and earlier this year. I noted, in my entry about Cloud Party, that the side-scrolling interface and lack of realistic avatars were detrimental to my fun.

But Tiny Speck, who makes Glitch, have added depth to the game by giving players more information in an as-needed and funny way. And a little house to call home. So here goes with the features I like so far:

References at One's Fingertips: An Encyclopedia is available even before the player enters the world. Glitch's cute backstory has some surprising complexity. Thus the entry on the Giants helps a great deal, given the game's location: in their giant heads.

I was able to find out a bit quickly about the paths open to players, because a Glitch (the name of our little peopleoids) must chose a series of linked skills at some point. With the reset I'm back to level 2, but I'm thinking that as before, I'm going agrarian with skills related to animals and plants. Note that one's Pet Rock gives hints. Mine suggested that I become a "Porcine Pleaser" when I clicked the "show me" button below, even as it gave other advice about how to become a more effective Glitch: 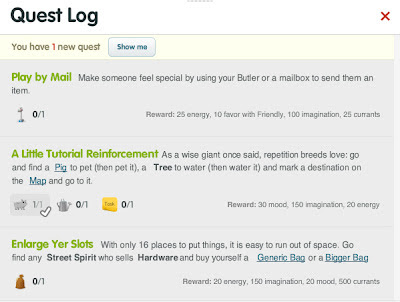 There are oodles of skills in Glitch. but from the Web profile for each player, a refresher of what the Glitched learned and can do is as easy as clicking the timeline, as I did for one of the first skills I acquired, Animal Kinship I. Each accomplishment can then be Tweeted. I did that for my Hen Hugger badge. I know the world stopped on its axis when that Tweet appeared.

Simple and Clever Menus: Compared to Second Life clients, with their dizzzying array of choices, Glitch's are straight forward: a "player" menu with a character's stats and links to content, and an "imagination" menu (shown at the start of this post), with choices for learning skills and going on quests.

In comparison, it would take a Type A Cyborg to love the menus in Firestorm, let alone its "Advanced" menu.

Everyone Gets a Home Base and Collaboration Reaps Rewards: For now at least, all Beta accounts in Glitch include a home street. My Pet Rock told me that if I can get other Glitches to collaborate on projects on my home street, I get more benefits and bonuses. 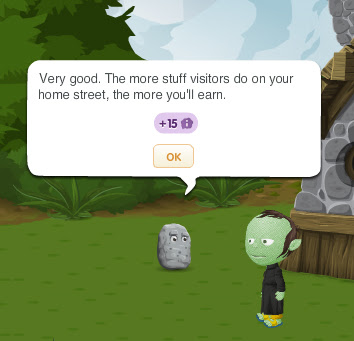 For educators, collaboration is a key to Constructivist pedagogy. So any online environment that fosters it would be preferable to one fostering competition.

Humor that is not Cloying:  Way back when, the Lindens had snowball fights with residents in Second Life and have a shared account called "Pony Linden." Once at VWER John Lester (then Pathfinder Linden) showed up as Pony and explained that Linden employees took turns as Pony to greet and entertain newcomers, even offering rides.

Those days are long over and Pony Linden's account was sent to the glue factory.

Conversely, in Glitch my Pet Rock and every darned menu pokes fun at me and itself. 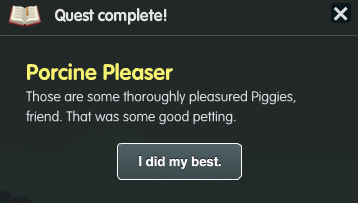 And, yes, there is a Shrine to a giant named "Pot." I thought I had imagined that last time:

Round of belly and capacious of stomach Pot is the Giant of Prosperity, with dominion over anything edible, cookable, munchable or nibbleworthy. Pot himself is not munchable. Do not attempt to munch any giants.

Every time I log out of Glitch, I'm warned "Wait! You were just about to win the game!"  I think that in terms of learning what a good virtual world should offer, I have already won. I'm far from an overarching theory about why I so like Glitch, in much the same way I liked Metaplace. At this point I only have a suspicion. Glitch lacks the gravity and gore of "serious" gaming, the festering drama that is today's Second Life, and the frenetic chase-the-monkey of most side-scrolling games.

There's some stoner magic at work in Glitch, some parody of Philip Rosedale's dream of a perfect online world. By not taking itself so seriously while fostering collaboration and non-violence without earnestness, Glitch charms. That may be utopia enough.
Posted by Iggy O at 7:39 PM

Still waiting for my invite. Soon, they say. Soon.