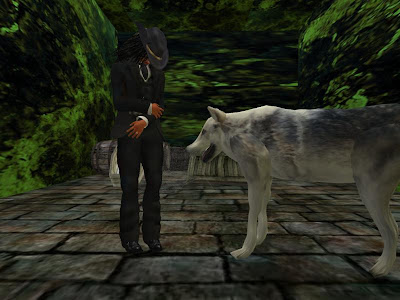 One thing was clear in Fall, 2011, when I last ran the House of Usher simulation in OpenSim: students wanted more danger.  That means injury and death, things very much in keeping with Poe's tales. The more macabre and premature one's demise, the better!

Second Life content creators have made a number of combat systems that can maim or kill avtars, but I chose Spellfire precisely so I could use some scripted animals from a content creator named "Restless Swords." This animals can also do Gorean-Meter damage, and though that system is simpler than Spellfire, which includes the need for avatars to sleep and eat, I cannot use anything "Gorean" on a university machine, period.

I went to visit Restless (teleport to his shop by the link here) as both Iggy and Roderick to buy some creatures. After some outstandingly prompt service from Restless to get the current updates for the scripted animals, Usher has a wolf wandering the crypts and a bat in the attic.

We'll see what our actors and student avatars do now. There's one weapon in the House, and they'll have to solve some riddles to get access to it, if they wish to defend themselves.
Posted by Iggy O at 7:11 AM