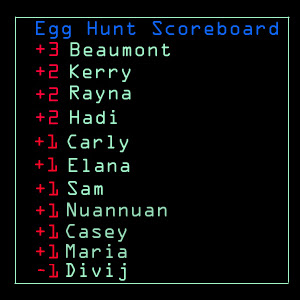 No one found that clue, but otherwise, we have winners and a new scoreboard.  I am mystified that none of the quests in the five eggs that were located have been done.

As for the online egg-hunt. The Haikus came in with ferocity, and all of them followed the 5-7-5 rhythm for the poems. All of them were very creative and made me laugh, so all our haiku writers got an extra point.

For the cheesiest line in Ready Player One, Beaumont wins for this one:


"Some time later, she leaned over and kissed me. It felt just like all those songs and poems promised it would." (Cline 372)

Both Leah and Rayna submitted interesting analyses of Poe's descriptive language, in comments both interesting and economical. I do like the sense of decline and decay that Leah sniffs out:


The mood of the house of the fall of usher is definitely a mood of suspenseful caveat. From the beginning of the stories description of the house being decrepit, just barely holding itself together, the story is being set up for the house to crumble. Also the fact that the story begins with Roderick in a similar state as the house (mentally and physically) from the start, the reader knows that Roderick is unstable, and that he’s going to go over the edge at some point in time during the story, we just don’t know exactly when. Also the story of the dragon at the end is a definite give-away of the suspenseful nature of this story. As he reads the book, all of the actions and sounds from the story play out, but slowly. First he hears a sound, but he’s unsure if he made it up or not, then the situation escalates to Roderick speaking to himself and the door being banged down, and then Madelyn finally coming in. these are all very suspenseful parts of a very suspenseful tail, and the warning in the story is unclear, but I feel that it is definitely foreboding of something.

Good job, Gunters. Now on to my swan-song teaching with Second Life's simulation of Usher, for the foreseeable future. Traditional papers are a lot less work, but not nearly as fun.
Posted by Iggy O at 5:49 AM