Viv Trafalgar wanted to give me a sneak peek at some of the new content coming for Heritage Key. I'd cast some doubt last fall on how well it worked for my class. So now I'll begin a few dispatches on what we found, on my return visit. This post focuses on the Tomb of Tut. I'll turn soon in another post to the orientation experience for Heritage Key.

I'm pleased that on almost all fronts that worried me, Rezzable's team has made some dramatic improvements to the areas I'd ticked off: lag, navigation, avatar customization, and stability. Viv and I, and one other visitor, interacted with only a few difficulties, despite a server upgrade underway as we did our tour.

When Viv met me, she wore a mask of Anubis, one of several rewards that visitors can find after completing puzzles and quests. I won't give any hints away, but the Tomb chamber for Tut has a timed game that leads one to win the mask. I got one, as my lead-in photo shows. Viv's at work on a series of playing cards linked to the history and culture of Tut's Egypt. She asked me not to post any of them containing clues, but here's a sample she approved: 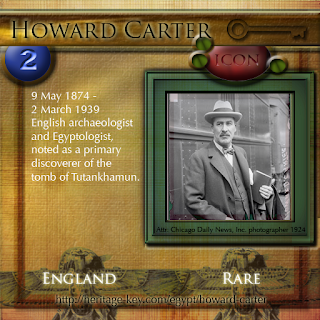 Adding these game-like elements linked to educational outcomes, such as learning which Egyptian gods governed which elements of the afterlife, really makes HK more than just eye-candy for educational visitors.

Moreover, I have a better idea of the context of the tomb itself, since now objects that Howard Carter's team moved are rendered in their original spots as half-transparent shadows (including Tut's sarcophagus). That last addition would be a fine way to enhance the "Saving Isis" project I did last fall with my first-year writing class.

I'd predict that for the Fall 2010 term (it being too late to work HK into Spring-term classes) that a few more educators will bring classes into the Valley of the Kings. I hope that Rezzable can do some work to get the project on educational radar, by sending articulate folks to academic conferences with a focus on technology in the classroom. I don't know the age-limit for HK, but if 14-17 year-olds can log on, I'd pitch the project to high-school teachers. Speaking only from my US perspective in Virginia, the state standards-of-learning require knowledge of ancient Egypt.

The site will only improve as more interactive content comes online. More importantly for teachers, the work on the Valley of the Kings shows that Rezzable has a long-standing commitment to education in its Heritage Key projects. I look forward to participating in their evolution.
Posted by Iggy O at 7:58 AM

Thanks for visiting Iggy! BTW that amazing Anubis mask is My Mackenzie's creation... and worth it; the tomb challenge is tough! Also, I can't say enough about my collaborator Ianthe Farshore - she's fantastic to work with on projects like this. I'm pretty excited about the work we're doing here - so I'll likely come off like a big goob, but I think that the platform Rezzable is giving to more serious / deep gaming paths that combine inquiry with exploration at Heritage Key is really important, and exciting.