What Sells and Second Life 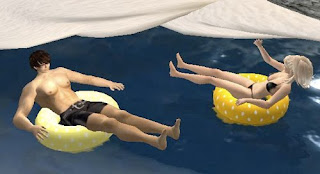 If only the social life of avatars were as innocent as the silly tubing-party shown above, from an item advertised on the Xstreetsl.com site, now owned by Second Life's creator, Linden Lab.

Dang, what a pile of commas in that last sentence! Qualifying clauses aside, I can state this: what sells there is both amusing and sad. I never fail to notice, out the corner of my beady eyes, the little "popular" box one sees after logging on to the Second Life Web site. 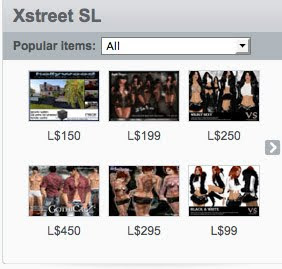 This is dubious marketing for something educators would ever consider "mainstream." Have you readers in education ever clicked on any of these items? It seems that Linden Lab does know where the money is, which may be why they aquired the XStreet and Onrez sites. The money, as people keep saying again and again at our weekly Roundtable meetings, is not with us: 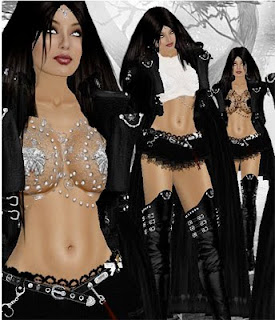 This outfit had the terms "Neko, Goth, Vampire" and more with it. I am so dense. I thought that the roleplaying communities (see correction at end) could not rival education for in-world spending. After all, we pay tier on entire islands. But I'm wrong, apparently. I reckon they own piles more.

Yet one wonders about how such promotion of content will influence future users. How will admins and parents react, when they browse the SL Web pages, and see this for the class in which junior has just enrolled? 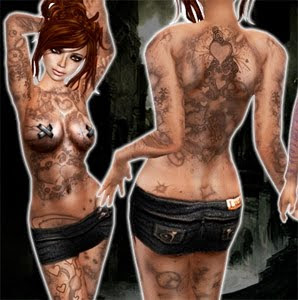 Yes, this is what is popular: awful ink and electric tape (not that I mind discrete ink in real life).

As in so much of our crazy popular culture, crap sells. And we who would raise humanity's lot with ideas worth debating, with science pushing back ignorance, with new ways of conceiving our place in an indifferent cosmos?

We get crumbs, as we do in real-life America. Yay, Goth-Fetish Barbie! You go, freak!

Correction for Jan. 19: I hope that the roleplayers of Caledon, New Babbage, Star Wars, and Lord of the Rings do not come after me with rolls of black tape. I stupidly generalized here. Not all roleplaying is adult-rated. Mea Culpa.
Posted by Iggy O at 2:57 PM

I agree that many of the odd outfits sell for a good amount of L$ or for free. Even medical scrubs come in a few crazy styles. Why?

Some say it is better to find two crazy outfits and combine them into a totaly new outfit.

I may quibble just a bit. Though I normally agree with you quite often, and do on many levels with this post, I find myself driven to split hairs today. Perhaps it's the weather.

But here we go - on two fronts. First. Perhaps RP and other communities should not be glommed into goth-fetish-barbie-profit-sales-claves, especially not upon the point of this particular issue, nor on the arbitrary tags created by advertisers. I do not feel your comments are necessarily RP-negative, but I thought I might clarify in any case that, in Second Life, there are entire Goth-friendly communities and, alternatively, entire RP-friendly communities where appropriate dress is Victorian in both attire and enforcement, as are the language, the discourse, and the level of propriety (there are other similar definitions of propriety, I chose Victorian because it's the one I know best).

Second. What strikes me in these photos, and what has captured my eye (even once nearly driving me to click on one of the images that looked, in thumbnail, nearly unclothed on the public all-access SecondLife homepage, just to be sure my eyes didn't deceive me) is the hypocrisy. To be Goth, or freak, or BarbieTM is a choice - much like the choice that we make to explore virtual worlds. However. To be shown images by an algorithm that may cause one to pause and blink (and question the meaning of "Adult Content" and whether that barrier also applies on the web) without a choice, in the name of profit for a company that wants to market itself to businesses and schools... that is the issue that the shopping thumbnails bring to my mind. That and the movement of all of the helpful tutorials and community guides to the shadows in favor of "how to deposit money at in-world kiosks," and "how to shop."

SL has many bright, creative spots. Many of those are in the educational communities, in the varied RP communities, and among groups of like-minded people throughout the sims. The advertising thumbnails on that homepage are selected by an algorithm that ignores taste, good sense, and the declared intent of the company that pays for that algorithm to be on the web. That's the freaky part. Which I guess is my point - agreeing with you. What is Linden Labs thinking with this strategy?

I really don't want to be judgmental but I do want virtual worlds to gain greater traction in education and I don't think a one-size-fits-all experience works here, not least after the freebies debacle. That is why at the recent VWER meeting I said we have to fix search and repository. The UK actually opened a repository today and, as far as I can tell, it has just the one SL item to date (out of 800+), a tent: http://bit.ly/4pmxj9. The system's less than perfect in many ways (e.g. only UK HE and FE can deposit) but I guess it's a start. Ultimately, I guess we also need a client we can hook up to the repository (or whatever sits on top of it) but I guess all the other third-party shopping sites (Apez etc) are thinking much the same.

Granted, Viv, that most RP in Second Life--Lord of the Rings, Steampunk, even post-apocalypse--does not necessarily veer into the Gothic-Fetish Barbie territory.

I was being crankey yesterday when I typed this, but the thumbnails struck me as a poor choice if LL wants to attract higher education. And they do, in fact, push the "adult" barrier on LL's site, a crowning irony of sorts. One needs a SL account to see the images, but they can be seen without age verification.

While I know that roleplay in Caledon or New Baggage does not veer into electrical-tape land (except when a mad inventor has to make a quick repair to a time machine) the term "roleplay" itself is a loaded word for many in education, as some roundtable meetings revealed. "Simulation" is a safer term. Gamers like you and me know the difference, but funding agencies, deans, and I.T. folks may not.

Peter, fixing search won't help us with how the Lindens market their world on their Web site. The deliberate choice of these Xstreet "popular" products, rather than, say, a Linden-selected batch of "clever new things on Xstreet" got my virtual goat by the short hairs.

Agreed Iggy - and Peter too. I like the idea of 'innovation seen at SLEX' - that would show the depth of what people make. though not all of it, as some of that was being given away for free, often by educators... oh dear. That's a different rant.

Well, Viv, I just blogged on search & repository so you can have a rant on my blog at http://bit.ly/7fC86Q -- and, before anyone asks, the tent is not great and I would not a priori exclude commercial stuffs from some metasearch engine, even though JorumOpen might not take it. Important thing is to get the edu data out there.