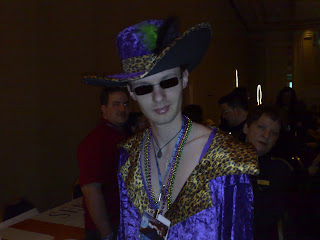 I ran across this 2007 story in Reuter's archive, "What will the next year bring in Second Life?" The only question I have, after reading this, is why we wonder about the poor perceptions of SL outside our resident base.

I know I'm taking cheap shots at the folks who dressed up for the "Leather and Lace Masquerade" at SLCC in 2007. Yet if that was a public face of SL during the era of lots of new coverage for the virtual world, how can we wonder at its poor perception now?

Kudos to Izzy, the poor Linden Lab employee who said, "Increased satisfaction among the membership.” Uh, yeah. Which membership?

I'm having a science-fiction-convention flashback!

With a couple of exceptions, photos of avatars would have done less damage to SL's rep. But then, photos from academic conferences would not help our reputations, either, even though we don't have "leather and lace" events.

It is precisely that reason why the 2008 SLCC had a very prominent EDU track (thanks to Chris "Fleep" Collins and Jonathon "Wainbrave" Richter). In fact, if I remember correctly, 2/3 of the session offered were tied to the EDU track. And there was nary a mention of Stoker's "balls" in the EDU program.

Well, thank goodness for THAT, AJ.

I don't care what consenting adults do in their free time. Still, if the 2007 pictures get dredged up, like old Facebook pics that college students wish they could forget, it does lasting harm of serious work done in SL and worlds that look like it.

One thing to say for M Linden's time at LL, despite some very reasonable complaints, the image of SL is slowly morphing to something more "professional." That can only help educators in tough times for our budgets.

Joe, blah blah blah on the pictures dredged up and all. What you are saying is exactly what folks said about the web. Remember?

If someone is going to look at, now, nearly 3 year old pictures of something like that, then they really don't need more than ANY reason to be against SL.

"I am shocked, SHOCKED, that there is gambling in this establishment!"

SF con flashback, indeed! (I used to go to those things, too.)

But, consider this: 50+ years of hair-let-down weirdness at convention parties has not diminished the quality of the genuine literature that can be found in SF (corollary to Sturgeon's Law: 10% is not crap). The same is applicable to the "genre" that is Second Life.

Okay, Lalo & AJ: it was a cheap shot I took. But my God! I could not resist when I saw the Reuters' piece...I've been working with Poe lately and his "Imp of the Perverse" got hold of me.

The sad thing behind the 2007 pictures is that the 10% like Stroker and Prok come to define the other 90% of us as pervs and anti-collectivist blatherskates.

As Sturgeon would have told us, had he written another corollary to his law, crap sells. And for news coverage, it draws eyeballs.

Digression about SF, before I return to SL:

Go to Barnes & Noble. It's the bare-breasted-babe covers wrapped around awful and predictable stories, while something insanely brilliant like Delaney's Dhalgren gets spurned by mainstream SF readers, and China Mieville succeeds in spite of the shelf-dominance of the shite.

BTW, from Wikipedia: Theodore Sturgeon called Dhalgren "the very best ever to come out of the science fiction field ... a literary landmark." I'm not swayed by Philip K. Dick's spurning it: he wrote a lot of shite amid some brilliant work. And Harlan Ellison, a writer whose work I love, was probably just jealous...

In the case of SL, you don't often enough see stories about the magical work of sim-building by artists (the NY Times has done a decent job, on occasion, as when they covered Filthy Fluno).

Normally, non-SL media choose to emphasize the 10% of residents (at least) who go in big for fetishes, violent sex, and other adult activities.

So my post is not doing any more damage to SL's rep then Reuters and others did in 06-7.

This is why I'm about to publish a glowing report on Heritage Key. Rezzable does not labor under the name "Second Life" and the Valley of the Kings simulation is educational and evolving: and there's not a bare breast or a Prokofy in sight :)