A Novel Way to Market a New Virtual World

Location: Watching one door close as another creaks and threatens to open

I read Iris Ophelia's post that Tiny Speck's Glitch will close, joining the ranks of Google's Lively and Raph Koster's Metaplace in the bin of might-have-been sensations. Will Cloud Party be next?

I loved Glitch for a short while, but did not spend a great deal of time there after the funny concept grew a little tired. I never found community as we ran about squeezing chickens, planting seeds, and donating goodies to appease the giants and curry favor with them.

Iris noted that she too had tried it and stayed away until she heard the world was going under. She also noted the beautiful content she'd found. It was not enough, since not too many folks even knew that Glitch existed.

I'll quote at length from the company's closing announcement about why it failed to attract a user base large enough to sustain the world:


And, given the prevailing technological trends — the movement towards mobile and especially the continued decline of the Flash platform on which Glitch was built — it was unlikely to do so before its time was up. Glitch was very ambitious and pushed the limits of what could be done in a browser-based game ... and then those limits pushed back.

I have said, many times, to colleagues still vainly cheerleading for virtual worlds that I see the future daily: students using handheld devices, not heavy-duty desktops or even, increasingly, laptop computers. I feel sorry for virtual-world evangelists today, especially though naive enough to think that Linden Lab's bizarre corporate culture will pull off some miracle and make our media landscape that of 2006 again. Virtual-world evangelists remind me of me and my geeky Apollo-era friends, waiting for the Moon Base and our flying cars. Going on toward 50 years later, we are still waiting.

So does Glitch's closure mean that the virtual world concept is doomed to failure? Unlike SL, Glitch was fast and ran in a browser. So Flash or not, what could the next starry-eyed designer do to bolster the success of a virtual world with user-generated content?

How about market the world outside the echo-chamber of those who use and write about virtual worlds?

There's My Flying Car! A Vision For Marketing a Virtual World

No world with big aspirations is going to get enough users by cannibalizing SL's user base. Not Glitch or Cloud Party. None of these, including Google's Lively or Koster's Metaplace, advertised.

Compare that to the big games. I saw lots of adverts for Mass Effect III and now for the Assassin's Creed series, including ads on television. Would such expensive TV blitzes help a new virtual world? I don't know, but I have a notion that something different might.

I am about to read Ernest Cline's Ready Player One, a novel I'll teach next term in my first-year seminar Cyberspace: History, Culture, and Future. The novel's setting is largely a near-ubiquitous virtual world called Oasis, and today I began to think: what if an author worked with a game designer from the start to let readers of the book enter the book's world? And what if the book contained clues and puzzles that might be of use in the virtual world?

Cline beat me to the punch, partly. He announced that:


I’ve hidden an “Easter egg” in the text of both the hardcover and paperback editions of Ready Player One. If readers can find this hidden clue, it will lead them to the first of three increasingly difficult video game challenges. The first video game challenge is an Atari 2600 game that contains another Easter Egg that will lead you to the Second Challenge. Completing the Second Challenge will lead you to the Third and Final Challenge.

A winner, Craig Queen, won an actual DeLorean car. While Cline did not take the audacious step of trying to get someone to build Oasis, he's on the road to it.

His contest is pure marketing gold, the sort of thing that Linden Lab could have done but never did, in their assiduous attempts to avoid advertising their world. Imagine giving away a real automobile in 2007, at the height of the SL frenzy, for a Premium member who had solved an in-world riddle. It would have made national news, and Linden Lab would have easily parted with a Porsche or two.

The Lindens relied on free media buzz and insider hipness to pump up SL. We are more harried and tethered to our mobile devices now than five years ago, so cutting through the smog of information would be harder. And hip? That's no longer the case for virtual worlds, so it escapes me why Tiny Speck, with a platform both more obscure and more stable than Linden Lab's, did not promote their game.

If someone can figure out how to create an immersive space that can be accessed by the computers we carry in our hands, it will still need marketing, where Tiny Speck, Rezzable, Linden Lab, Raph Koster, and Google all failed. It will take a tie-in to the broader geek culture, and it will take something like what Cline is pioneering: cult book and world released together.
Posted by Iggy O at 8:41 AM 1 comment: 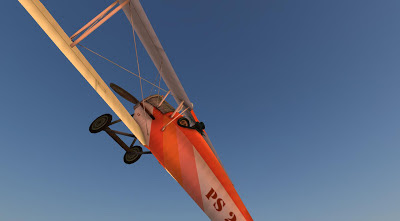 I want to both congratulate Linden Lab for the premium membership gift of a nicely rendered WWI biplane  and ask "if I want to dogfight, can I cross sims now?"

The answer is "maybe." From where I rezzed the biplane, it flew nicely and to test my aviation skills, I did a few barrel rolls. Immelmans and loops can wait for next time. I crossed a couple of borders into protected land that is not full of user-generated content. I'd not want to try that on the mainland where I still have a small parcel.

Is it even possible to fix that problem? UGC is what makes Second Life Second Life. It also bogs down sims with loads of poorly written scripts, overdone builds, and other lag-magnets. 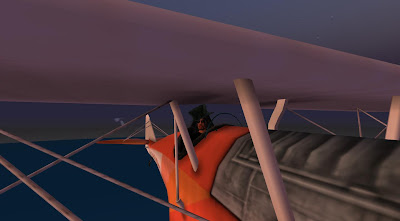 Drive or fly anywhere. That's the gift I'd really like from the Lab. Aerial combat does not tend to run into invisible walls in the sky.

If the GOP wishes to survive in  a changing America, they need to, in no particular order past point one:
If Conservatives wish to survive, they should read more David Frum and David Brooks and James Fallows. Leave Limbaugh, Coulter, Donald Trump, and their ilk behind in the cave, and move ahead.  Will they? I doubt it, and as James Howard Kunstler has often noted, the GOP seems destined to join the Whig Party in the dustbin of history. I differ with him only in his prognosis that "[Hurricane] Sandy was a kind of preview of coming attractions for a different sort of wreckage to come." We still have time, and we may end up poorer and humbled from changes to our economy and climate, but Tuesday's results show that a plurality of Americans still want what Obama, and not the GOP, offers.
Posted by Iggy O at 4:00 PM No comments: