Evolution of a Bald-Headed Freak 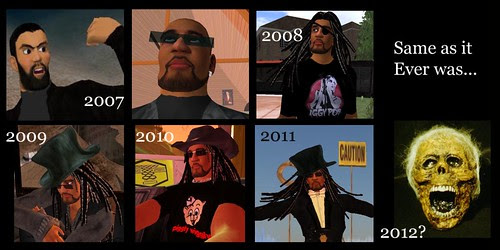 I just could not resist this challenge by Harper Beresford to show what we've done to ourselves since rezzing way back when on Orientation Island. You can see the Flickr photostream of all the entries.

Fake me is the worst fashionista in the lot and was put to shame. Yay, me!
Posted by Iggy O at 5:43 PM No comments:

Location: SL with Mesh, OpenSim Without

The new meshes for SL, in some quarters, get depicted as the savior of the virtual world.

Um, okay. That's worth its own post...I don't know that Linden Lab will see tens of thousands of new and tier-paying users just because their world looks better. But educators, busy with so many other things related to their teaching, may not even know what the fuss is all about.

So here are a few premises for those new to Mesh, before I moderate next week's VWER meeting, entitled "Mesh In SL & Education: Boon? Bomb? No Big Deal?":
Now for a short editorial. I just finished more building in Jokaydia Grid, using in-world tools and Photoshop. With Mesh, however, I cannot do collaborative builds in-world with a team, and acquiring the skills-set for the new content isn't worth my professional time. In this pic, I used a cylindrical prim to put a rotten corpse into a tomb, the sort of thing that could look downright terrifying with the new meshes.

But I doubt that my students will spend more than 30 seconds at this particular spot. What price in time and energy to take the next step to more immersion?

My evaluators could care less about mesh, and to be fair, why should they? For assessing educational outcomes, they don't need to know a sculpted prim from a Slim Jim. My colleagues working in virtual worlds will need to ask themselves some hard questions, unless they work at a school where students have the skills to create items using the new meshes.

I hope that by the time I'm done, this island and House will feature about a dozen apparitions. I've yet to figure out what the couple of malicious ones might do.  Ideas are welcome!

Mostly, the helpful spirits will provide a clue or a warning.  Here's the latest one, just after Roderick rezzed her for the first time.
Posted by Iggy O at 12:14 PM No comments:

Readers new to virtual worlds for education, or perhaps looking for new places to go alone or with students, should have a look at the transcript posted from a large group of educators at the VWER meeting of August 25.

It's doubly useful in how I aggregated recommended sites, by academic field, at the start of the transcript.

My sense is that while schools are generally downsizing their SL presence and educators are moving some work to OpenSim, much great SL content remains.  In fact, I'd hazard a guess about why the Reaction Grid region for the 1939 World's Fair appeared.  It's one of the few well known quality builds outside SL for educators.

I'm hoping that in comments to this post (and the post at VWER) readers can suggest other sites, particularly those outside SL. Ener Hax will, I hope, discuss what is going on at I Live in Science Land, and we'll get other non-SL updates useful for "back to school" planning for sites such as Heritage Key, where I've not been in some time.
Posted by Iggy O at 7:51 AM 3 comments:

Surrounded by well dressed female avatars at the recent VWER meeting, I realized that my shoes are SO 2007.  All of the guys were getting some much-needed ribbing about our lack of fashion sense.

Educators--especially we guys--are not known in-world as fashion plates. So after a scolding by the ladies, for whom shoe-shopping is apparently a big deal in SL, I used the revised (and useful) search feature in Firestorm, my choice for a Viewer-2 compatible SL experience. I'm making an effort IRL to dress up more on campus, so why not in SL? Baby needs a pair of shoes!


Without turning this blog into the skid-row version of Iris Ophelia's dispatches, I'll add that I enjoyed the experience of buying shoes in world. I love shoes IRL and buy nice ones, so I'm not a typical male shopper. I look for certain European-style dress shoes or tough-guy boots, in both SL and RL. In those regards, Jeepers Shoes (teleport link) does not disappoint.

I was particularly amused by the unique way the shop handles demos...a rock chained to the shoe.

Given that my suit worn in these shots, a "Madison Avenue" discussed in an earlier post, comes from a creator who has left SL, I felt that I was doing my bit to support the in-world economy by laying down 500L for two nicely made pairs of shoes.

My shopping won't save SL, but it saves my pride.