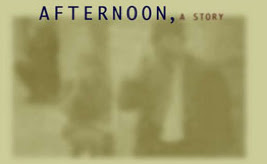 Location: Lost in a world made of letters

Michael Joyce's nonlinear, elusive narrative Afternoon, A Story was a delight to postmodern literati and literary scholars in the early 90s. It ushered in a long list of titles from Eastgate Systems, and at the time I tried--without too much success--to bring them into a few of my classes.

I'm delighted to see that W.W. Norton has released a partial edition of the hypertext for the Web. I come late to even this party: the site talks about Windows NT, Netscape, and other artifacts of an earlier time.

The Gen-Xers of the day were as resistant to hypertext as are my current Millennials to virtual worlds.  I don't know that this is a "University of Richmond thing," because then, as now, I heard from colleagues elsewhere about resistance and anger: Gen-Xers wanted closure and linearity in their stories.

Have a look at Joyce's text, if you don't know it, and see how your reading experience morphs in the equivalent of Borges' Garden of Forking Paths. One enters not a story with good hypertext, but a world with many meanings. No two visitor/readers come away with exactly the same impression.

Why did literary hypertext not thrive, to blossom in the era of e-readers that would have been a delight to the 90s authors and enthusiasts of hypertext? That is for others to answer. I moved on from what I considered then to be a fading "niche" technology, even though I published a poetic hypertext at Carolyn Guyer's Vassar site, Mother Millennia. My research into the subgenre of literature ended after I published an article about using film to help students understand strategies for reading hypertext.

One wonders if the sort of utopian virtual world that Second Life once promised to be might morph into another future, more corporate, less risky....in rather the way hypertext fiction was eclipsed by HTML-based hypertexts, literary, linear or not, that never quite matched the subtle linkages afforded by Eastgate's StorySpace technology.

I once heard author and scholar Nancy Kaplan argue for the essential differences between Web and "native" hypertext, in a conference where, glumly, Michael Joyce told us that the number of .com sites had finally surpassed .edu sites.  A groan came from us in the room: the future was at hand, not one we wanted. The marketers and hucksters had found the world of the artist/coders of hypertext.

It may be hard for the readers of this blog to even recall a time when it was otherwise.

"There is no simple way to say this," Joyce says in an early textual moment in Afternoon.

So go back and have a peek at a might-have-been in literary and technological history.
Posted by Iggy O at 3:34 PM

*smile* I do recall this time, as I was learning HyperCard, hypertext, then SGML. I very much liked the early experiments; my own experiments with hypertext were a dream diary, Brian Eno and Peter Schmidt's Oblique Strategies and various philosophical excerpts. I envisioned Burrough's Naked Lunch in hypertext; that would have been the ultimate cut-up novel...

I'm surprised Eno and Schmidt have not yet released the Oblique Strategies in an online environment. Maybe the cards are one of those RL "rares" that gain status by their obscurity?

And yes, 14 years ago the Internet felt more like a frontier. Now it seems like a city with interesting neighborhoods, always in danger of gentrification by the yuppies, and surrounded by asteroid belts of banal suburbia, mega-malls, and office parks.

Eno's "Another Green World" was often my explorer's companion.