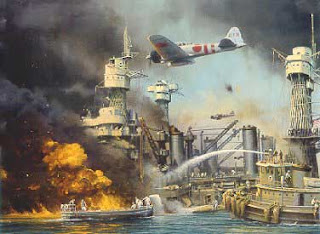 68 years ago, the inspiration for the little plane I glued together and painted, as well as Vals and Kates, roared out of a clear Honolulu sky to send America's prestige (temporarily) to the bottom of Pearl Harbor. The nation bounced back, lulled out of isolationist nay-saying about the intentions of Fascist Italy, Nazi Germany, and Imperial Japan.

It's time to take a little break from virtual worlds to consider the inventions we build in our heads, when we are faced with danger yet ignore it. In that, the lessons of Pearl Harbor still resonate.

It's hard to think, now, how by the late 30s, Depression-wracked America still could not see the terrible menace posed by Europe's totalitarian systems. Perhaps it's an American virtue, or vice, to blissfully forget how past threats mounted, quietly, until--to use a more recent metaphor--their long shadows rippled across the gleaming surfaces of tall buildings soon to fall.

The problem with another contemporary threat, global warming, is that it lacks that terrible moment of clarity of 9/11 and Pearl Harbor. This morning, NPR reported that, as claimed in the findings of a recent Harris poll, "barely half" of all Americans consider carbon-dioxide levels in the atmosphere to be capable of warming our planet.

This disconnect from scientific thinking should terrify those of us who put trust in the the scientific community and consider our economic fortunes inextricably linked to our ecosystem's health. Every day we hear about the decreasing size of the Arctic icecap, the deletion of Greenland's glaciers, and the freakish weather that drowns Bangladesh (or Biloxi) with increasing regularity. And yet, like Americans on those sunny mornings in 1941 and 2001, we don't realize what is in the sky above us.

The defenders at Pearl likewise had some warnings, but they mistook radar-blips from the Japanese strike-force for incoming Air Corps B-17s. Meanwhile, the USS Ward sank a Japanese sub near the harbor. Messages to commanders,who might have called ships to battle stations or launched the P-40s at Wheeler Field, went unheeded or got delivered long after the bombs began to fall.

After the attack, FDR's existing plans--from a man derided as a Socialist--to build the nation's military might swung into high gear.

Now we've again wasted time. I'd hoped that Hurricane Katrina might have been the "Pearl Harbor Moment" for this new global menace.

As President Obama goes to Copenhagen, good science struggles with the nay-sayers of the GOP, scared citizens overwhelmed by seemingly distant climate-threats, and polluting firms like Exxon-Mobil who fund climate skeptics. We may need a few more ecological Pearl Harbors.

In 1941, a nation pulling itself out of the Depression and with no great appetite to become a world leader was roused to action by Isoroku Yamamoto's sneak-attack. But up to that point, Great Britain, the Free French, the Soviets, and the Chinese were hanging on by a thread.

Perhaps Obama needs to embrace FDR, not JFK, as his model. And when safety and prosperity return, and carbon levels begin to stabilize (it will be decades before they diminish) he'll have generations of working-class Americans, like my parents, who will honor him and his legacy by voting for his party in election after election.

That's the hope I have for this Pearl Harbor Day.
Posted by Iggy O at 8:26 AM