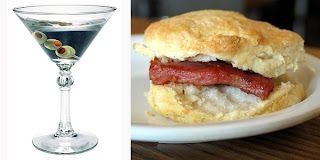 Well, it's that time again...for country ham. The real thing, Yankees: not some water-and-smoke-juice-injected mild ham but a smoked-in-the-smokehouse-by-rugged-and-somewhat-tipsy-Virginians ham.

Rule one for all-day cooking, such as that required for perfect ham: keep the drinks handy.

At the recent VWER holiday party, both Iggy and his ol' pal Pappy Enoch showed up to cut the rug and do some ice skating.  Pappy tried to give out Iggy's recipe for a perfect Martini, but Iggy needs to restate it here for those who could not attend. If you visit Richmond, you'll have to go to Thai Diner Too with us, so Yoko and her husband Jack can mix you one of Richmond's finest drinks (and best-kept secrets). Iggy's recipe is a pale shadow of theirs.

You will find these smoked hams, ones that can store without refrigeration until sliced, in country markets and gourmet shops (they do exist!) throughout the South.  Yankees and other unfortunates can order them and when prepared properly, as the chef at Edwards shows us in the video, the results are dramatic and delicious.

Our chef does not consider how to soak the ham. Doing this loses much of the salt but keeps in the smoky flavor. It may still be too salty if you slice it thickly, so practice thin-slicing on some lesser meats, then proceed.

Here's my advice for this year for getting yonder ham ready:
Pappy: "Whee Hoo! Let's eat!"
Iggy: "What he said. Where are the olives?"

The only ham I've had that I prefer to real country ham is Jamon Iberico de Bellota, and that costs $30 per pound, if it can even be found in the US. Jamon Serrano is close, and vies for my love of ham, but I digress. Must be that Martini!

Boxing Day Update: the ham was astounding, the best in years despite overcooking to 165 degrees. Several pounds have been hoovered up by hungry Southerners. Note to self--new meat thermometer, then recheck near end of cooking time with my digital one.
Posted by Iggy O at 7:33 AM

Merry Christmas to you! :)