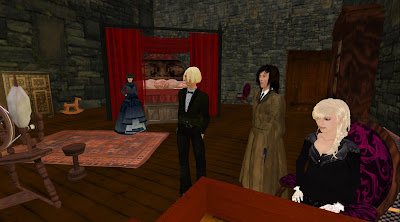 Until then, so long and thanks for all the prims.
Posted by Iggy O at 11:24 AM

Joe, you are a brave soul and a true pioneer. It has been an absolute pleasure to call you colleague and friend for lo these many years.

Lol! Chief, you always threaten to stop doing this but you're not fooling me.

This was an invaluable post nonetheless. Basically, the Usher experiment was akin to somebody trying to tell an oral story to a bunch of kids with ADD who are allowed to do whatever they want while the story is being told.

Having said that, I could, however, see how fiction (new and old) can make use of the virtual platform. You certainly took a logical approach to it but I think it just requires reassessing what it is you are trying to teach kids about Poe. Is it his themes? Him and his era? The concepts of fear and horror? How to tell a scary story?

I think there is the potential to give kids the ability to answer these questions through the medium of their choice. Reading POE is one way to experience his kind of storytelling. Could kids be taught how to convey a Poe-like story through a technological medium? I think so.

C'mon admit it....you like being on the cutting-edge. And you'll get no sympathy from me.

Never say never, Cecil. But I don't HAVE a class suitable for virtual-worlds work for at least 3 years.

We'll see what happens then and I'll reassess techniques at that point :P