Dealing with Skeptics on Campus 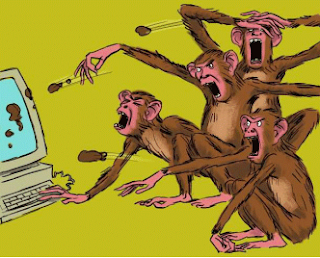 Poor AJ Brooks! Our intrepid moderator had a raucous crowd on hand for the discussion of "Non-VW issues" last night. These should have included staff management, budgeting, project-planning, and so forth.

The moon was not full, but it might as well have been. AJ had a chatty and chaotic group of around 40 of us, and we resolutely stayed off-topic until near the end. Some excellent discussion did emerge (I'm combing through our transcript now). A major bone of contention (a fine metaphor, that) was how to convince campus skeptics about SL's value. These ideas emerged from the swamp of discourse:
Comment of the week goes to CathyWyo1 Haystack:
those who have the most success with using sl are enthusiastic with their students and encourage fun at the same time as learning.

Update for July 17: The entire transcript can be found here.

Thanks to everyone who participated.
Posted by Iggy O at 7:26 AM

Rather than evangelize, entice colleagues by using snob factor, as in "I can't come to your (boring) real life meeting because I am participating in a 3-D virtual conference with colleagues all over the globe right now."

Loved your great review of the SL Educ. Roundtable yesterday! It was my first meeting and I enjoyed the energy and productive exchange of ideas - even tho I definitely had to do a little speed reading to keep up with the comments and felt some relief when it was over, whew!!!

And, now that I have found your blog, I will read it frequently if not faithfully!