If Princeton Left Second Life and No One Were Around... 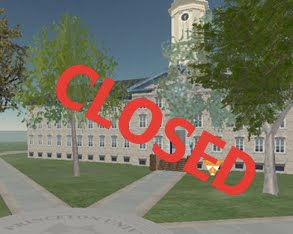 How big a noise would it make?

Not a big one, it seems. Ener Hax, in a post dated May 1, notes offhandedly that Princeton has abandoned Second Life. I completely missed this announcement. I could find nothing at Princeton's site or at their daily student paper's site, either. I then wrote to the campus administrator in charge of the project. As of today, I've not received a reply.

While I strongly disagree with the claim posed by Hax's title, "Second Life: A Distraction for Universities," Ener grabs eyeballs with it, and then the article qualifies the claim nicely. This, Ener, is what you get when a Rhetorician has a look at your prose :)

2007: A Lot of Promise at Virtual Princeton

I did a little poking around and found an article in the Daily Princetonian's archive. Note the plans:

Second Life user Josh Shulman '11 said the University should use the technology to make its academic offerings accessible to a wider audience, as well as to bring international speakers to campus via the Web.

"Princeton should be thinking about holding courses and special seminars from all over, where students can sit in their dorms and watch," he said.

Shortly after, another article noted how nearly no one had been using the virtual campus.

Princeton, like many schools with presences in SL, began to replicate the brick-and-mortar campus and include spaces for the sorts of lectures Shulman mentions. Apparently, this sort of engagement never occurred often enough to sustain the efforts. I'd contend that this reflects a larger problem I've seen with schools that have a visible "brand" in the national market: while some I.T. folks got aboard the SL train, the inability to provide faculty with incentives to master a difficult user interface and plan lessons stymied any growth among the best-known schools.

Second, replicating a campus and setting up lecture halls make little sense in a world where we can fly and where a lecture can be streamed to the flat Web. Virtual worlds are places for simulations and immersion, not recapitulation and passivity.

Some cool ideas appear in the Daily Princetonian's 2007 story, such as allowing incoming students to explore the virtual grounds and use that experience in their "room pick." The idea was, however, instantly doomed. First, too many prims would be needed to replicate all of Princeton and, second, many incoming students had not reached the age of 18 and could not create SL accounts.

As a result, the often-reported "empty virtual campus" stories began to circulate about places like Princeton. I did tour Princeton's grounds in SL once, and sure enough there wasn't another avatar on the map. Richmond's own campus island is usually empty, unless we are running a simulation at Usher or someone is building. A few avatars meet there from time to time in my office. That's not an unreasonable investment of our monthly tier to Linden Lab, but it's not bustling. That said, we have a vision for the virtual space we rent. Many other schools did not.

What Should Have Happened Instead

I found Poid Mahovlich's YouTube video about "Diversity" a really impressive build on Princeton's land, through a post at Get Architects' site. Poid, heavily involved in designing and promoting Burning Life each year, understands the potential for these sorts of spaces.

The "Diversity" build captures what's not possible in real life, and it's what not enough colleges, during the hyperbole era for SL, tried.

It would be nice to think that we might get a second crack at it. But these are, fiscally, very different times from 2006-7.

Many schools, in love with the technology and hearing the hyperbole about SL, seemed to have decided to stick a toe in the virtual water, in the same manner that many corporations did in 2006-2007. And now, like those firms (GM, Scion, American Apparel) I wonder if Princeton's departure signals the start of an academic exodus from SL?

If so, the departure may not be total. One irony of Princeton's failure is that community colleges and other small schools account for much of the innovation within SL. These schools, without the tenure system and its valorizing of juried work published in established venues, and where great undergraduate teaching often occurs as a mission of its own rather than as an ancillary to research, can take inexpensive risks that may yield high rewards.

If you want to see what was in virtual Princeton, I recommend Aleister Kronos' post from 2007, "A Peek into Princeton." I just hope that the build was archived by a creator. It's a shame to see such buildings just "poof" on us. In 2007, Hamlet Au rated it #6 in his roundup of 10 best art installations in SL.

Any readers have links to stories about the Princeton decision?

Update 22 May: Thanks to Peter Miller for alerting me to this post by primperfect. Princeton had hosted several "voids" for notable art, but:

The reason for the removal , given by Persis Trilling, sim owner and Princeton University representative in real life, is a simple one.

“Because of the new pricing structure announced by Linden Labs, Princeton is unable to sustain its current void islands. The new pricing takes effect in January.”

It seems that the voids were the beginning of the end at Princeton in December 2008, and they were the compelling part of Princeton's in-world presence. The rest of the campus, where not much happened, followed in April of this year.

This was maybe the start of it: http://primperfectblog.wordpress.com/2008/12/28/crash-and-burn-iii-the-princeton-sims/

I liked the central sims and the Scope Cleaver builds but there was rarely any evidence of teaching-related content beyond the visual arts. The Resource Centre on Forrestal was a nice touch.

actually, i learned of this via Poid

lol on examining my rhetoric. i openly write as a mix of an excited 14 year old with a hint of the wisdom from being older, having been a teacher, firefighter, fencer, and just general life stuff (plus the very real and deep experience of being in second life in a big way)

i do think second life was a distraction for many schools and companies. the hype was so big three years ago and i also pitched to institutions and companies

people jumped into it for the wrong reasons thinking it would be something it is not. some of these people have created exceptional "things" and programmes that add value and continue to be worthwhile

thank you on the very flattering words. i'm sorry i did not comment sooner

My pleasure, iliveisl, to run your words.

I agree that early on, many schools just replicated their brick & mortar campuses in SL because they could.

More nuance came later, but as I've learned about Princeton from the SLED list, a lot of really good work did go on. Sadly, and this may reflect on the priorities on campus, SL never went "mainstream."

And virtual worlds still are miles away from that. Perhaps if Unity-type Web portals lower the bar, faculty and students will begin to explore these worlds and hunger for immersion in what can be extraordinary simulations.

this is where some sort of second life archive could hold so much value. no doubt that some very well thought out and executed projects occurred on the Princeton sim

but unlike a library full of books, we are left with nothing to build upon and advance as a result of all the work Princeton did. that is a true shame =(