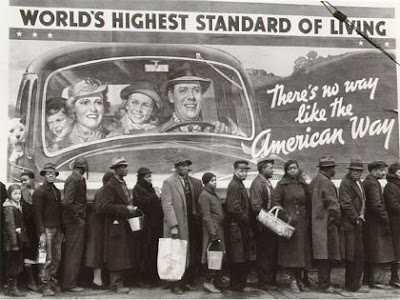 I've been thinking of a longer post here about why I call myself a neo-luddite, even though I enjoy virtual worlds. Here's a teaser as to my philosophy, courtesy of one of my major influences:

Once upon a time, the stock market was a place where people with capital went to look for productive activity to invest in -- say, a company devoted to making soap flakes, an underpants factory. Now the market is a robot combat arena where algorithms battle for supremacy of the feedback loops. Thursday's still-baffling fifteen-minute "crash" was an excellent demonstration of the diminishing returns of technology.

I find Kunstler's attitude toward technology quite similar to my own. Namely, we both share a neo-luddite's interest in sustainable and local technologies and embrace the Internet to communicate in the dying era of print news and rising era of slanted political news (Fox is nothing new, readers; it's a return to 1840s journalism). Second, Kunstler and I both know that, over time, the promises of most technologies are mingled with their problems and provide what he calls "diminishing returns." For those who use social networking and other new forms of communication, the diminishing seems to happen when we run out of time to pack in one more application.

Like the stock market and the world economy, that I believe will crash into a deeper recession on or after the advent of permanent oil depletion (or Peak Oil) I think we will see the limits of what sort of experience virtual worlds will provide. I have my doubts that photo-realistic and fully interactive worlds are coming soon, if at all, unless we figure out very energy efficient ways to power server clusters in a time of national energy shortages and forced rationing that will come with Peak Oil. I may be wrong on the technical hurdles for photo-realism in VWs, but even if these worlds do appear, will consumers begin to regard them as illusory as whatever underlies "value" on the stock market?

Or was Jean Baudrillard right, and consumers prefer the hyperreal to the quotidian, and embrace a better-than-reality simulation of something? Disney Land's Main Street over a real main street?

Meanwhile, the shell-game on the financial markets continues. We should all be paying attention and holding our leaders accountable. Our real lives and virtual diversions won't endure a big Crash very long.

Read the rest of Kunstler's reaction of the European bailout at "And Chicks for Free?"
Posted by Iggy O at 5:55 AM