Terrence Linden seems to be assigned the tough jobs by his employer. He's an urbane man who visited the Virtual Worlds Roundtable a while back, just before the price-hike for education and nonprofits. We all liked what he said to us, then, though a week later I'm sure a few educators were saying entirely different things.

Now Terrence got the short straw and has to explain to residents how safeguards will work when 13-17 year old teens are permitted on Second Life's Main Grid next year. I waded through the comments to Terrence's post, I wondered what the changes might mean for those who teach, host sims, hold events, or develop educational content.

First, we'll have to police not only our profiles but also those of visitors who come to our events on any sims zoned "General." Linden Lab is clearly not doing this, and though certain terms can be blocked automatically in classified listings, does the Lab have the ability to consider every photograph in a profile pic?

For 13-15 year olds, to me it seems that Linden Lab's safeguards are sufficient. They will be locked down to estates where they have been sponsored.

But for 16 & 17 year-olds, who will be able to come to the Mainland, I agree with Ceera Murakami, who opined "Parcel bans to NOT prevent someone from camming into a parcel and buying content from vendors. They do NOT prevent anyone who is banned from interacting with content in the parcel they are banned from. The only "safe" thing to do with the arrival of the teens is to remove 100% of the content that is not G-rated from the mainland. Period. The vast majority of the Mature sims on the Mainland are within camming distance of one or more G-rated sims."

Linden Lab currently lacks the ability to police camming and clicking. One of my students, in Fall 2009, found many adult items in plain view on the Mainland just walking down the Linden-built roadways.

After the Teen Grid merges, no teen, in theory, will be allowed into a "Moderate" sim, the analog to the Mature sim. This, too, needs to be tested carefully before teachers bring their teens to the Mainland. My student later walked into a night club in a Mature sim to find a couple on a pool table, talking very dirty in public chat while warming up to have cybersex in front of the other patrons. Only my student and the loving couple can be seen here. 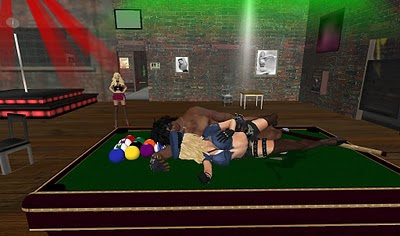 My student was not looking for this sort of content. He was part of my gender-or-race-change assignment, and he used in-world search to find popular social spaces to see how other residents would react to his female avatar. Not wanting a turn on the pool table, after an "Ewwwwww! Old folks doing it!" (and a snapshot!) he left. He was also 18 years old.

The Logical Fallacy of "It's No Different from the Internet"

How is our diddling among the pool balls different from what a minor might see on the 2D Web? A lot tamer, if it were only snaps. But I want to head off a rather facile complaint that "SL is no different from the Internet." In a PG-rated word, bullshit.

As an interactive environment, SL's content can "talk back" and educators make a great deal of how immersive it all is. We cannot argue that the environment is both more realistic than other online experiences and yet, when it comes to adult content, no different.

As meshes come to the grid, we'll make a big step closer to a photo-realistic metaverse.

My European colleagues will be scratching their heads over a lot of my concerns, but while the USA is not Iran, we have many thin-skinned moral conservatives who would not mind filing a law suit or two. We have conservative-activist Attorneys General in states like mine with ambitions for national office. A few appearances on some law-and-order TV show "protecting our children from online smut" would further such careers.

And we are a litigious nation.

It May All be Moot

While 16-17 year olds will be able to register from home, at school it may not be an issue. Even after the change, many schools will not touch SL with a 10-meter prim pole. My wife's county does not let any flavor of SL through its firewall, and having exceptions granted is a tedious business.

Personally, I'm not even bringing my of-age students to SL in 2011-12, since I'll be using Jokaydia Grid and my Usher simulation. Any who explore SL for class research will sign my usual waiver. By then, this mess may be sorted out. Or not. Linden Lab needs new customers, and getting teens in-world seems to promise that. I'd argue that they could have already signed up in droves for the soon-to-close Teen Grid, had Linden Lab spent money on marketing.

If Linden Lab wants more concurrency and dots on their map, they should have instead encouraged in-world shopping and fixed some of the extant problems with their grid. Merchants like Morris Mertel have closed their in-world (and teen-friendly) shops to go to the online marketplace.

I'm just glad my colleagues and university won't be dealing with this legal jungle.
Posted by Iggy O at 4:08 AM

And, once again... the most effective solution to "don't go there" (mature/adult content) is: Don't Go There (Second Life).

Lots won't Lalo. I'd hold that the very brand of SL is tarnished. It needs a name change. But LL is probably after the individual 16-17 year old with this change moreso than those in classes.

I am glad to be in an all-PG grid now. If the kids want a kinky pool table, they'll have to figure out how to make one themselves! And then they'll be in clear violation of the grid's TOS.

I think you're dead-on about the target audience -- but I had the existing adults in mind as well: the conscientious ones who may decide it's more trouble that it's worth to clean up their profiles and Picks as well as their shops and their public language. It's the oblivious ones who won't bother (or even know that they should), and the "stiff-necked" ones who'll refuse in protest, who will get the ARs.

I.e., it's the Lab not caring a whit -- again! -- about their established customer base in their frantic grasp for sign-ups.

The key is how you rate your sim. Right now the MSU sims are rated PG. Teens will not be allowed on to these sims, from what I understand. So, the simplest way to deal with this is not on an individual by individual basis, its to deal with it sim wide.

I can tell you that the VWER will not be stopping anyone who wants to come to a meeting, nor will we censor or ask to leave anyone who is there. This is not our job. If the Lab wants to deal with it - they made this bed, they can police it.

Students under 16 years old will not be allowed to use search or to leave the sim/estate they are brought onto the grid on.

AJ, I'm glad we won't be ejecting anyone. Having something in one's profile is not akin to coming to a meeting naked (on purpose; Viewer 2 seems to like doing that randomly to folks).

As you note, Linden Lab creates this ambiguity for us. And one has to go looking for content in a profile. Still, what would you do at a meeting if someone in the PG region had the group tag "Biggus Dickus" over his head at a meeting? I can think of other ruder tags, but I've Monty Python on the brain.

And Lalo, you're right...if the Lab can show solid growth again, they'll be ready for the sell-out I've long been expecting.

Joe, there is nothing to stop someone from coming to a meeting with a rude tag on now. I had to think long and hard (no pun intended) as to what to do last week when the BDSM attendee showed up. If something was truly offensive, I'd probably ask the person in private to change their active group to another one. But the real question here is, what would I do if someone showed up at an actual world meeting with an offensive tee-shirt on? VWER meets on a PG sim, so we are all adults. I probably wouldn't do anything unless and until it interfered with the meeting.