Cry, "Infringement!" and let slip the dogs of copyright!

This is quite the black Friday for those fearing over-zealous IP enforcement.  Tateru Nino and Hamlet Au have covered the snafu of the Frank Lloyd Wright Foundation's decision to not renew permission for The Frank Lloyd Wright Virtual Museum, an homage to the architect's work built in Second Life. I won't cover that, since both bloggers have done such a good job already.

Neither of them note, however, the red meat Linden Lab has thrown to prowling law-dogs, when LL pushed commerce to their online marketplace.

Hamlet notes that one reason for the reversal of an earlier decision to endorse the SL build was the Foundation's outrage over Wright-themed items on Second Life Marketplace. Never mind that the items were not made, sold by, or endorsed by the group in Second Life.

A concurrent event could make this situation far worse for, say, anyone in SL who makes a sneaker that resembles, not that I've ever seen such, a Converse All-Star. Tateru also reports, in another post, on a bill in the US Senate, "The Innovative Design Protection and Piracy Prevention Act," that would permit "prosecution of similar designs for clothing, which need not be limited to physical clothing, but also of virtual items. Formerly, only the trademark text, logos or other iconography on clothing was protected – but now the whole design" would be. 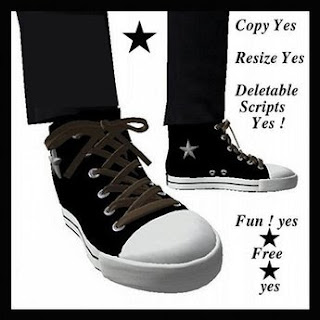 By making changes to search in SL that made many merchants close their in-world stores and migrate the online marketplace, Linden Lab began to reap revenue for each transaction in a way they could not from in-world locations. Of course, it lost tier payments for those merchants who closed their shops. What the Lab probably did not anticipate is how easy it can be to comb through a Marketplace search for "sneaker," even without a SL account, then flag copyright violations. Many interns and junior partners at law firms will be busy for years on this.

I suspect that the quarry will simply find a new home.  Such a waste of legal talent, when copyright holders, such as Wright's Foundation, might instead encourage homage in fan-created items.  After all, no one is making a replica of Falling Water in the world outside my window, then putting it up for sale as "just like Wright's masterpiece!"

It's ironic that Wright chose the term "Taliesin" for his studio.  In Welsh myth, the trickster/demigod/bard stole wisdom from the Goddess of the Underworld, Ceridwen. The goddess pursued Taliesin, who kept changing forms to evade her and her wrath. She finally got him, changing herself into a hen who ate the trickster, who had become a grain of wheat.  Ceridwen became pregnant and birthed a beautiful child, and she was unable to slay the reborn Taliesin.

Ultimately, Taliesin got away with his affront to a deity. I suspect that the sleek and greedy hounds of Copyright Law will make a lot of money chasing the protean figures who follow Taliesin's example. And yet, after a long chase, the hounds will lose their quarry in the wilds of the Internet.

Will Linden Lab lose business? No doubt. More commerce may come back in-world, but some will just shimmer and vanish, like Taliesin's becoming a salmon and swimming away.
Posted by Iggy O at 12:44 PM