Grandpa's Box: My Thoughts on the Future of Our Computers 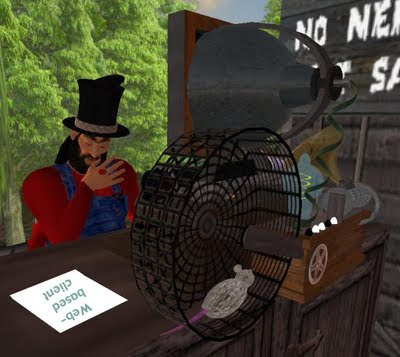 I don't know how many of my friends among Second Life's digerati are in contact with young people on a daily basis. I am, and I am stunned by how fast they are abandoning the personal computer.

The other day, I got a briefing from a Writing Consultant who works for me. She reviewed our Writing Center Web site and, while polite and praising the content, noted that the organization is all wrong for a student audience. "I no longer use my laptop," she admitted. "The iPad is my primary computer."

Much of our content, developed over many years and going through a vetting process with several bureaucratic levels, is all wrong.

It has happened with hyperdrive speed, this shift.  We are not an engineering or arts school: our students reflect typical affluent users.

Should I cheer at this funeral?

Iggy in the Confessional Booth, Before St. Steve

As a Mac-OS fanatic, I take no comfort in Apple's victory with portable devices. Windows-users, we are in the same boat, because the iPad is no Mac. Or Windows PC.

It's the anti-Mac, or better still, the final realization of Steve Jobs' dream of 1984: a sleek and closed-down platform with an elegant interface, but where one pays a price: Apple controls every damned thing. The iPhones and iPads are also hip examples of industrial design, just as the Mac of 1984 was no bulky (and sturdy) IBM PC of the sort I then owned. The IBM was for office-clones who had reluctantly given up their Selectric typewriters. The Mac was for artists and freaks.

It was a machine with a personality. Over time, it acquired a soul after Jobs' hammer-lock on hardware design was yanked away. Except for Extensions conflicts before OS X. But we won't go there...Jobs' "second coming" swept away the Old Order.

Jobs is a man with Olympian ambition and an insanely great idea or two: his ideal factory would take trucks of sand in one end and ship out computers at the other end. He wants to own the whole system. Henry Ford was smiling from plutocrat-heaven when he looked down at St. Steve.  Tim Wu understands this well in his book The Master Switch. Wu takes some well aimed swipes at Jobs.

Sorry, Steve. I really adore your OS, but I'm thinking of backing Google with an Android purchase. And--horrors--I think I'll be playing Mass Effect on an Xbox 360.

Confession #2: I'm going to buy that in several months, mostly to play the latest Mass Effect.  Let's give the Devil his due; Microsoft kept their corporate wet-blanket culture off the gaming division, and out of that we got the Kinect.

My "Nerd-Night" tabletop RPG group consists of one Mac-guy (me) and a bunch of Windows-based gamers who get away from their MMOs to go "old school" and roll some d20s. Some of them own console games, but not a one uses a smart phone or tablet.

They are dinosaurs as surely as I am. They don't get why the next generation of computer users are eschewing desktop systems for portable devices. I, on the other hand, get it.

Millennials want to always be in touch with their hive. They need self assurance and confirmation of their choices, and they do their social planning on the fly. That's impossible from a tethered desktop or even a laptop. I've yet to see more than a scattering of students use a laptop outside, as university promotional photos often show. Instead, they compute as they walk across campus. Give them data glasses that look just like sunglasses, and they'd use them too. Just don't make them stop, even for a nanosecond.

I recently had an epiphany that the wider culture is also getting it when I saw this Scott Adams' cartoon.

My buddies and I are Dilbert. My students, the young fella.

I don't know how Apple's closed system will fare against the Android OS from Google. Poorly, I secretly hope. But as a Microsoft-hater, I am also pleased that Windows will be the biggest loser of all. The company, except for its Kinect, has been no innovator in recent years. Was it ever? Steve Balmer has the cool-factor of Dilbert.

Whatever our desktop OS, I think we old timers with our grandpa boxes will look back at the System Wars of the 1980s and 90s with nostalgia. Like many other hobbies I embrace, from model-building to boardgames about World War II, the rest of society has moved on and I'm in this eddy of forgotten time.

I see a future in which content creators will use powerful computers in some form. The rest of the public--the consumers--will want to be close to the Machine. Machines as easy to use that they are ubiquitous, a part of our bodies.

It's what Sherry Turkle of MIT has called "always on, always on you" technology. Get ready for it.

But I still don't own a cell phone...my "dumb phone," a pay-as-you-go model, expired in April.  It won't be missed.

I'm really hoping the iPad becomes a real computer. Then I'll lose my clunky desktop. iPhone usage leads to laptops and iPads. Those little cuties make it easier to hook in wherever you are.

I don't subscribe to the one computer/pad/phone/world idea. Everyone has jumped on the mobile computing bus. I saw tons of ads in the Staples free tax weekend paper for pads and tablets of many descriptions and prices.

I refuse to get an implant, though. I don't enjoy being always on. I hope they won't make me.

mmm well, you know... there's users... and system people. Users always use terminal-type stuff. Tons of desktop/laptop users now never cracked a case, have no idea of how transport protocols work, and etc. 90% of people have no idea how to open a command terminal in Windows.

Fine with me; they can play with their toys all they want. Behind those toys are real computers; just as the net doesn't really run on Windowz Boxen. I prefer to know about how things work, so I can fix, modify or repurpose them.

Someone on a Windows or Mac machine can access the internets. I can talk to the machines running the nets. That option will not be going away.