Creating Claustrophobia in a Build 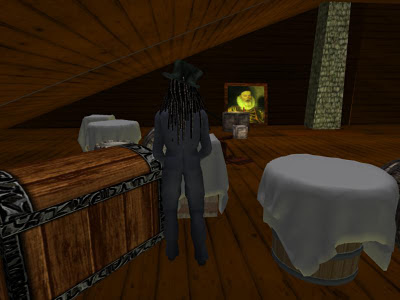 I'm close to finishing the SL build, at least to the point where I'll open the doors for visitors. Later, we will schedule a few events with our Usher actors.  I wanted, first, to address some concerns that my last group of students had in the OpenSim build.

See the chest to the left of my avatar? It's way too big, and I cannot resize it.

Normally, I'd build something or do without, but here, I  decided to "leave it big" (also letting me pull out an old inventory item we liked before).

Students noted that the House in Jokaydia Grid was not cluttered and crowded enough, and in both OpenSim and SL builds run bigger, with taller ceilings, than most real-life spaces.  That's the fault of 8' tall avatars and the clumsy way the camera follows  us when we move.

To create claustrophobia in wide-open spaces, I have tried a few methods to "trick the eye." These reverse the process I wrote about for creating the illusion of vast distance. Notably:
adding low-prim partitions and obstacles in rooms
In doing these things--and I am sure I will find more techniques!--I continue to be amazed at the low-cost affordances of building in SL or OpenSim. While some educators are tempted by Minecraft or Unity 3D, I would ask them to consider the outcome desired.

For now, at least, for low-volume simulations SL and OpenSim suit my needs perfectly. I've been back to the Trident Main Store again and again for items I cannot or do not wish to build. Unlike some of the mesh items from Turbosquid that John Lester showed me for building, the costs have been trivial, a few thousand Linden Dollars total.
Posted by Iggy O at 7:03 AM