Do avatars dream of electric hillbillies? 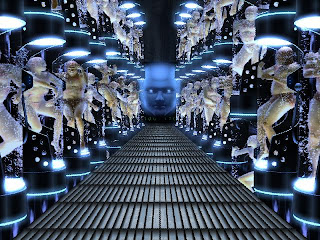 Location: In the freezing cold

Oh well, where shall I start? Its difficult, since the reasons for taking a break are numerous.
LL is definately not innocent here. The experience using SL worsened from month to month while at the same time nothing has been done to improve it. The lag was constantly killing me and SL became more and more a graphical chat client.

Losing my ability to explore took one of the foundations of my time in SL from me. Additionally I had to cut short on my expenses and so had to give up my land and lost the ability to build and experiment. Even if I could have continued to maintain it, I guess that LLs current unwillingness to give the major part of developing resources to the improvement of the user experience would have spoiled it anyway.

But the main reason in fact was, that the social interaction on the grid turned in a way that made me do that last step back to the meatspace.

A friend of mine noted once that the pace of SL roughly equals five times the speed of the meatspace and I think he is right with this one. The consequences out of this are on the hand.
People pop up and vanish from day to day and the fact that you have build up a connection to them doesn´t make it easier. Losing friends (and I mean real friends) that way is a hard loaf of bread and I think that Iggy is right here, when he states that people can become friends in SL. What makes the essence of a friendship? Its surely not the physical closeness, its far more. And this essence can be transported via SL very well. So losing people at 5 times the speed of normal life can be a very sad experience. Things even turn worse, when when the friendship becomes intense and from one day to the next you get to know that the person on the other side of the monitor tells you that it was discovered she has cancer and will die in a few months. SL is surely not a game, and people saying so, haven´t understood it.

When I came to SL it was filled with people that were very like minded and that is surely the "fault" of the big hype around SL in early 2007 (no wonder it made me curious myself). Many of those have long gone and today I meet less and less avatars that have mastered more then the two sentence "wanna fuck?" conversation. Additionally the vast growth of the grid has dispersed the avatars over virtual square miles and traveling to find a person sometimes is as hard as back in those frontier days.

Those whom I am still in touch with I connect mainly via external sources now, rendering the SL client useless. IM and Mail are still very potent ways of communication and I intend to stay in touch with every single one of them.

To refresh your memory Iggy: We met when a Hillbilly started working for you as a guest writer. That charming do no good constantly asked me to meet you and write as well and the rest is history ;) as is Pappy Enoch I guess, since I haven´t heard of him in months.

[Iggy's note: Pappy is alive and as well as he'll ever be, though he's not in-world as much. He can be found as a "Pullet-Surprise Winning Reporter" for the Alphaville Herald. He's being paid in virtual chickens.]

The one that has to say "thank you" is surely me, since the experience you offered me with mentoring your classes was awesome and I would surely haven´t had that opportunity in meatspace.

I don´t know whether I will return some day or not. It will depend on my lust for SL to return which could happen. I haven´t deleted the avatar and it can be reactivated any time. So rumors about my death are hugely exaggerated.

Logging out for now,

SL has problems for educators, too. Mostly, it's admins fearing the adult content and I.T. folks realizing the steep demands posed by the client software.

I'm confident that as soon as a company comes up with a way for us to move between virtual worlds with much of our inventories, the "one big metaverse" model will be in serious trouble. We'll pick and choose worlds that suit our educational, professional, or social needs. Maybe that will get you back in the fold :D