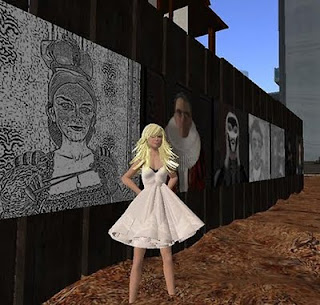 Location: Ready to Carry the New Media Consortium Staff in Triumph on My Shoulders

Reading through the old-timey "composition books" my students use for notes and (nearly) private writing, as well as their blogs at this site, reveals some interesting differences from my last class to use SL. Pictured above: a writer at the SL Globe Theatre.

1) Coming in at the NMC orientation area led most of them to see, right away, that their notions of SL were limited. Many had expected less education and more "Sims" in SL. As one writer found out:

"The interesting thing about the [University of Caledon Oxbrdige] is that it is set up like an actual college would be [for SL]. . . .there is the College of Camera Control and College of Communication. This is very helpful, especially for a new resident like myself because it teaches you about the basic controls that are in Second Life that can help you assimlate into the society more readily."

2) My avoiding "gee whiz" rhetoric about SL, and stressing equally the joy of creation there and the academic reasons for using SL helped, as it did in 2008.

3) The first hour remains crucial. Using NMC Orientation for our first steps eliminated the "noise" of having noobs run past with boxes firmly on their heads, but otherwise naked. I often saw that, as a Linden Mentor working the public Orientation Islands. Instead, my class started well and moved more quickly to explore the Metaverse. 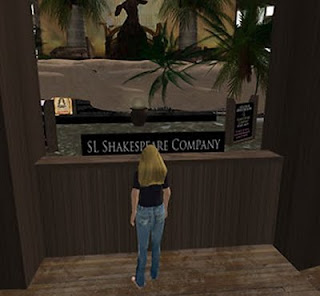 4) Taking my students, one by one, to a freebie store was a wise move, rather than sending them alone. On a second visit, one of my class got approached multiple times by a male avatar who wanted to "go chat some place private." Had this been student's first experience in SL, she might not have ever wanted to visit a store again. I swiftly sent them my page on warning signs and responses, such as how to mute avatars.

5) I've so often been dismayed by students' unwillingness to take intellectual risks, but so far the class seems to enjoy exploring, with the aim of learning how to use SL better for more demanding assignments. One of my writers summed up her SL work this way:

"For me, typical homework can be considered boring and tedious, but Second Life allows me to release my inner curiosity while having the courage to step out of my comfort zone with homework."

6) So far, they are not competing for the Linden Dollars I assign for the scavenger hunt. Only three writers have remembered to e-mail me when they post pictures of a completed task. Does this mean that the Lindens mean little when compared to a grade, or do they just prefer to be on Dr. Freud's couch at the Virtual Theorists Project, trying to get advice for dealing with a crazy professor with an avatar? 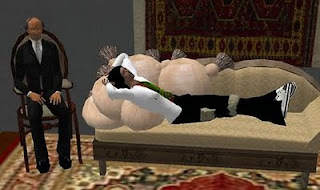