Heritage Key: What the Educators Learned 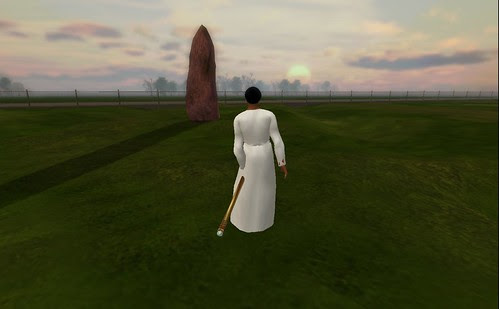 Around 30 folks showed up for the meeting last Friday, and this tested the ability of Heritage Key's system to hold up under a lot of pressure. Crashes were indeed fewer, even as we all moved around more than we did last year.

In this post, I'll share my impressions of what we saw, what changed since the last visit, and what Rezzable's Team will need to consider.

Special thanks to Pavig for going above and beyond to serve as docent for one group, when another docent failed to show up. Viv and I led the other two groups.

Navigation: The Travel Center / Hub is a brilliant idea, because it's the intuitive point of departure for the past. The time-travel metaphor works better, however, than overheated teleporters. Too many educators crowded in at once. Only one of my three visitors survived the trip without crashing. The other two, who had friended me, did not relog.

Those who left for Egypt seemed to have fared better. We all gathered for some group photos at the end, near the Life on the Nile exhibits.

I am not technical enough to tell my friends at Rezzable how to fix this. But a new metaphor for travel would be counter productive... so a large-group teleport strategy, perhaps one that allows a leader to teleport a group of people at once, or a HKurl system, or a wearable customized tour HUD, or all of the above.

Rezzable's folks are clever, and I'm sure they could build something as cool as Irwin Allen's Time Tunnel! 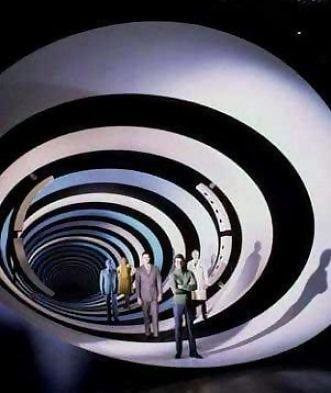 Right now, I'd recommend two changes. First, that Rezzable remove the "Solstice" teleporter for modern-day Stonehenge and put those bound for Salisbury Plain through the one marked "Portal" so they will then choose their era. Traveling companion Hobbs joined me in making the mistake to go to modern-day Stonehenge. It was lovely but not as interactive as the ancient site. We also had a heck of a hard time getting back as there was no return teleporter we could find.

Second, Rezzable will also want to be sure that teleporters back to the Travel Center are readily available at every destination. This would avoid how Hobbs and I became stuck in the time machine, rather like Allen's hapless scientists.

Interactivity: This will be needed in all areas. I'll confine my remarks to Stonehenge, though I'm keen on seeing what my Rezzable colleagues have been doing in Amarna.

Visually, the modern circle of stones was absolutely stunning and the evocation of a Summer Solstice dawn perfect. I've spent a good amount of time in stone circles in the UK where one gets a view of the horizon. I was unnerved by how the HK build moved me, emotionally.

To keep student interest, some sort of quest / game might enhance the modern site as it has done (find that log!) in the Neolithic areas. For example, I showed Hobbs the Welsh Bluestones, the Avebury Sarsens, and the famous Heelstone just relaying on personal knowledge. A quest to find them with a prize would spur visitors to learn the geography of the site.

Education & Games: There's an element of both paideia and ludus in the HK sites. The former idea, of playfulness that may not result in a goal or outcome, encourages the explorer just to look about the site. The second, with rules and outcomes, works well for educators (the Valley of the Kings segment is particularly strong here).

I hope to see more materials, however, for educators rather than for a broader class of visitor. I've suggested to Rezzable that a teacher's kiosk with possible assignments in range of disciplines could help, perhaps with links to parts of the Heritage Key Web site. Right now, it's hard to see how a teacher could structure an assignment beyond "explore all this and write about it." Since many teachers will be new to any virtual world, I'd recommend that Rezzable challenge us with an assignment competition, with small prizes going to a dozen winners.

Their projects could then become the nucleus for the Teacher's Kiosk at the Travel Center. 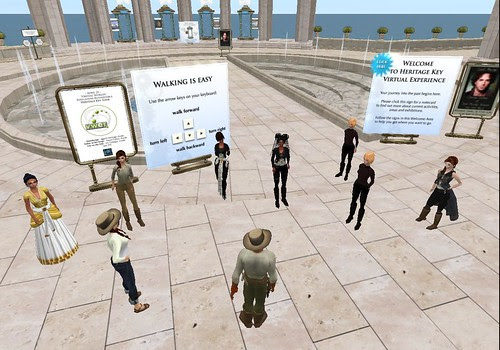 Meanwhile, I'll be looking forward eagerly to future visits the other parts of Heritage Key. I don't have nearly enough time to explore it in depth, even this summer, but I'll keep readers posted as I continue my explorations. 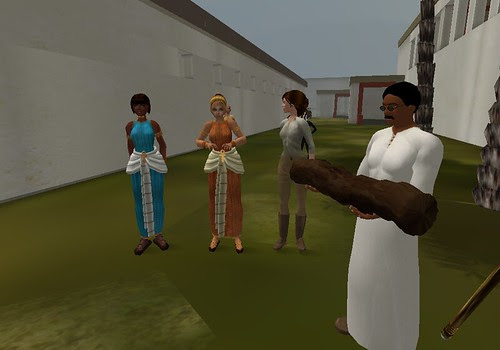 Final note: I love my Neolithic log...the crazy "help the builder move the Sarsen" is perhaps my favorite bit at Stonehenge.
Posted by Iggy O at 10:47 AM

I would just like to say that there were many improvements. Despite the technical problems I still enjoyed the visit and learned something new. : )

Here I am wondering if bringing a Stonehenge-era log into 1350BCE Egypt constitutes a rift in the space-time continuum. Next I'll be finding motherboards woven into mummy wrappings.... whatever will we do? Thank you for the very thoughtful overview of the VWER adventure Iggy - it was great fun, from the perspective of being a VWER member as well as from the perspective of being part of the Rezzable team. Now go try one of the expedition journals in Amarna or Valley of the Kings! I think they'll give you some ideas...