Why an iPad is Not in My Future (For Now) 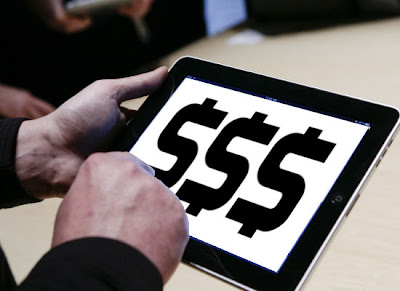 Okay, it's not about the price. This is one thing that Apple did get right with their new toy. I will always pay a bit more for Apple hardware because, in my experience, it holds up longer.

My dozen Macs, with one exception since 1998, have been bullet proof. I have encouraged at least a dozen others to purchase Macintoshes since 1998, when we got our “gumdrop” second-generation iMac. It ran for six long years, after a processor upgrade, and a student in an Alaska middle school is still using it.

The iPad hype should make a Mac zealot like me happy. To quote from a Bloomberg story, Apple, “the computer maker turned mobile gadgeteer,” has reached a plateau I never thought I would see, in the mid 90s when I defiantly stopped using Windows. The company “overtook Microsoft Corp. to become the most valuable technology company on optimism the company will keep adding customers for its iPhone, Macintosh computer and iPad.”

Maybe not for this Applehead. I have to admit that while the iPad is a seductive gadget, it’s not yet what I want: a device that lets me collaborate with others, live, using “the cloud,” which to me means Google Docs and Flash support.

At that very moment, I read Steve Jobs’ Tweet that “The future of computing isn't Apple versus Microsoft. It's Apple versus Google.”

In my house, the future of computing is collaborating with others. And Apple’s antipathy to Google, the venue for my collaboration, makes it seem a lot more like the Microsoft I have so long ridiculed as arrogant and single-minded, even when doing so hurt it.

The failure to support Flash on the iPad encouraged NBC and several other content providers to state that they will not be converting their content for Apple’s tablet. From a story at the New York Times:

“With support for Flash in both the upcoming Google TV platform, as well as in Google's Android mobile operating system (an OS that's now outselling Apple's iPhone), Google is making it clear that for the time being, the Web still needs Flash.”

These decisions will be a terrible mistake for Jobs, akin to his botches with the Macintosh lineup in the mid 80s, just before John Sculley replaced him as CEO and became the fall guy during Apple's long twilight. Now it just might happen all over again.

If Google can produce an e-reader the size of the iPad with Flash support, I’ll be buying it, not Apple’s offering. Given the success of the Android phone on the market as well as Google Books presence, such a device would be a small step for Google to take. There’s a twist to this story. On Twitter, a parody page claims the following as Jobs’ bio:

How true. This is the world of Steve Jobs. For now, however, the iPad aura seems just another radiation from the famous "reality-distortion field" that he projects. He disdains the very customers who have kept Apple afloat, introduces products that he considers insanely great, then moves ahead.

So far, he's mostly been correct. I keep buying Mac hardware even though I think that some offerings, like the latest version of iMovie, are poor when compared to its predecessor. Apple selectively removed features, apparently to encourage content creators to pony up for Final Cut Pro. So far, I've not done so. I also canceled my mac.com account and switched to Bluehost.com as my site-host because Bluehost offered better Web hosting, lower prices, and the ability to edit content with my own software, not Apple's extremely limited templates.

Even considering such gaffs, Jobs’ company has long been an innovator, unlike Microsoft. Bill Gates’ and Paul Allen’s brainchild was superb at making their OS “good enough,” then leveraging their products and establishing a standard for desktop computing, especially in the business world. Microsoft could afford to be arrogant for many years. Apple cannot, because now they have another competitor that is as innovative as they have been: Google.

In education Apple hung on to market share, as it did with creative professionals. That second category seems secure, for now, but education has not exactly gotten the red-carpet treatment from the House of Jobs. My wife’s school system, Henrico County, is gradually switching to a Dell contract, because Dell was flexible with prices for laptops and service. Apple was not. Ten years ago, Jobs flew to Richmond to give a speech to the teachers to trumpet the county-wide laptop initiative with the original and second-gen iBooks.

Aside from Google’s threat to Apple, Microsoft is far from out of the game. Windows 7 is really strong, jettisoning the bloatware of Vista. Some of Henrico's older Dells limping along with Vista will work far better when they are re-purposed to run 7.

Jobs does not listen to customers like me, but here's my take. Sometimes having a better product, as I believe Apple does for hardware, the OS, and for media applications, is not enough. Thus the lightweight tablet in my future may run Windows 7 or Google’s Android OS. I’ll need such a device for a big trip in 2012 that will feature a running set of posts , and by then the iPad may have evolved into something I’d buy. Or maybe not.