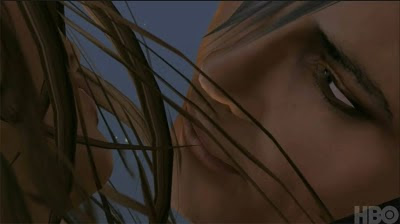 Second Life's rep as a place for online hanky-panky was the butt (ahem) of many jokes during the media-hype era of 2006-7. At that time, the Lab often played it down, then moved overtly adult content to its own continent.

I thought that the move to Zindra was wise at the time, and it's essential now that minors are in-world, but I always wondered why the Lab dodged the "hook up" scene that is so much a part of their world.

It was with some satisfaction that while logging on to the Lab's web site, I spotted an advert for "When Strangers Click," an HBO documentary.

You can visit the site and watch Clip # 4, where a fellow chats about the romance that blossomed in SL. It all looks rather innocent, two avatars dancing and kissing under a perfect night sky in a garden where no one need stoop to pull any weeds.

Perhaps Linden Lab wanted to promote this as a counterargument to all of the stories of more visceral encounters in their world? The sappy romantic music had me laughing, and I can imagine my chuckles swelling to howls of merriment when my students stumble upon the clip.

At the same time, and for the first time in a long time, I see the Lab making a savvy marketing move. They know their core audience is not educators like me or the hard-core gamers of my weekly "Nerd Night" crew. It's not even my fellow-travelers, SL's wonderfully creative artistic community.

Increasingly LL's bread-and-butter customers are roleplayers and fashionistas and those seeking romance.  These folks want toys and experiences. And to thrive, the world needs new blood. So why not sell your platform's core strength?

Get out the Barry White.

Could we expect more of same from the Lindens' new CEO?
Posted by Iggy O at 4:56 AM

As the resident Ally McBeal, I can only applaude this move.

I think the parents of my generation ate something while we were in utero. We are definitely the over-sexed generation.