Peak Oil: Should I Be Glad? 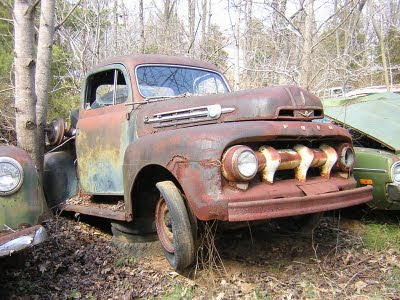 One of the most interesting of invented worlds is that of America's auto-utopia of continuous driving. We redesigned...well, ruined...our cities to make them safer for driving and parking cars. What would we do if it cost hundreds of dollars to fill up? Already, filling up my full-sized pickup truck runs $100, the first time I have ever spent that much on fuel. A tank of gas will last over a month, however, given how infrequently I use the vehicle for farm work. I purchased a locking gas-cap, too.

Others drive similar vehicles daily, and they are suffering, often casting about for easy targets to blame. What if geology were the culprit?

It seems that even Exxon-Mobil has come around to seeing that the days of cheap oil are over permanently. I follow Bloomberg's energy-price listing fanatically, given my belief that the data about Peak Oil are correct and we're a year or two from this issue becoming part of the popular lexicon.

As with Climate Change, the transition to public consciousness took a while to realize.  There are a few doubters who believe in an infinitely renewable supply of "abiotic" oil, but the science is just not there.

The next time some guy wishing for $1.00 gasoline to fill the fat tank in his Chevy Suburban blames the President or even OPEC for high gas prices, try this. Hand out a little card with this URL from Energy & Captial:

When investors start recommending Peak-Oil portfolios, one realizes that the transition to a "new normal" is well underway. I've know "it's over" for a long time, and my proof came in a Guardian story based on a Wikileaks report.  Though the Saudi official who warned US diplomats later denied making alarming remarks about his nation's supply of oil, everything said seconded Matthew Simmons geological evidence for a permanent decline in the Saudi oil reserves.

Meanwhile, Jim Kunstler keeps up his own litany of doom about an America unable "to make other arrangements" than what his loves to call "happy motoring." Jim's prognosis is gloomier than mine, but neither of us know the timing of the disruptions that a permanent decline in the global supply of oil might cause. I suspect, unlike Kunstler, that many Americans will still own cars, but they won't define our lives and places of living as they have done.

Gas prices are dipping, for now. I doubt that will last, given global demand for oil.  And whether global supply permanently peaked in 2006 or whether it will in 2016 (my bet is somewhere in that range) we'll enter a new era of human history. The automobile age, barely a century old, will become a short aberration in a longer story, as driving returns to being an expensive luxury.
Posted by Iggy O at 8:57 AM