Turning an OpenSim Bug Into a Feature 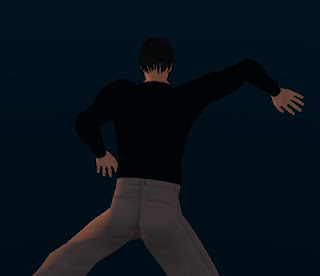 Location: Falling Into an Abyss

One side-effect of "lifting the skirt" of Nevermore island to make mountains has been to reveal an OpenSim bug. I have not encountered this in Second Life for a LONG time: falling off the edge of the earth.  I've asked Jokay Wollongong for a history of this fascinating bug.  If you know more, share in comments.

The avatar steps or falls into a space that is no space, a void that gradually darkens as the Z coordinate races into the negative. Soon, the screen grows black and still the avatar falls into infinity. A teleport or logout solves the problem. But why waste such a delicious doom?

With the flaw in mind, I have found a way to kill unwary student-explorers who venture too far in search of hidden knowledge. If a student falls into the abyss, we will assume that the simulation has ended for that participant, and the team must venture on without that person's help.  Roderick may even wish to lure one or two meddlers to their deaths.

Of course, hints and clues abound, as do stone markers near the verges of the island, inspired by an actual warning sign I saw, a decade ago and more, in rural Wales: 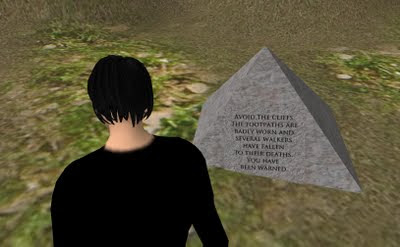 While a quotation from Poe himself might be best for this situation, something from "Manuscript Found in a Bottle" or "Descent into the Maelstrom," I think I'll leave the evocation of mood to Poe's literary descendant, H.P. Lovecraft:

We live on a placid island of ignorance in the midst of black seas of infinity, and it was not meant that we should voyage far. from "The Call of Cthulhu."

Just remember on your journey: mind that gap. You have been warned.
Posted by Iggy O at 11:06 AM

Ha! Excellent! Yes, "going into the Deep Blue" is very strange and interesting. I love your use of it!

I have been exploring/using the dreaded "alpha bug" for awhile now as a feature of the worlds and have gotten some interesting pieces out of it.