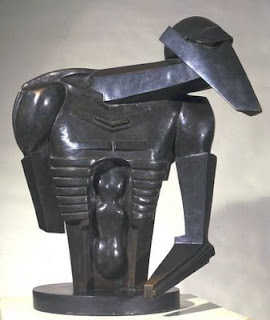 “Do you, then, wish to waste all your best powers in this eternal and futile worship of the past?”

Old zealots can sill teach us lessons about the dangers of enthusiasm.

Marinetti’s ideas were everywhere, but especially in my head, as I wandered the gallery in the former Bankside Power Station in London: the sort of Nietzschean temple of electricity that the Futurists considered the most appropriate houses of worship. I don’t care for many things about F.T. Marinetti’s ideal of Futurism, but I do wish that the old war-loving protofascist could come to life for a few days, join me for a cappuccino, and log on to Second Life. He and I have one thing in common: a craving for tomorrow.

Futurism, for all its ideological warts, led to some original and dangerous art. Isn’t that the only sort of art that ends up as dorm-posters and cocktail-coasters?

The Futurists idealized speed and made a fetish of technology, which is not far off from how we all get “in the zone” when SL works well on our systems. I felt it on my last road-trip in SL, when the physics introduced since my last upgrade let the car coast and even drift, a level of verisimilitude I associate with console gaming.

When we log on, the past, of our bodies and our civilization, falls away as we roar (or fly) off into a pixilated sunset. There is no carbon-footprint in-world (though all those SL servers give pause, but that is a worry for when we log off).

Whatever the future holds for Second Life, enough of our population will crave tomorrow, or at least an idealized and streamlined version, to log on to some virtual world. Let’s face it: the masses never got flying cars and jetpacks. Such a future is only available to Spaceship 2 customers of Richard Branson—on the telly just this morning—or those with 20 million dollars for a ride on a Soyuz into orbit.

Feeling denied? Then, onward, transhumanists! You’ve nothing to lose but your sagging flesh, on that glorious day when you upload your intellects to the grid. Is it not true that “Time and Space died yesterday. We already live in the absolute, because we have created eternal, omnipresent speed”?

Of course, the Futurist impulse glorified warfare and considered women a nuisance, at best. Then World War I came and complicated matters. The best laid ideologies! One piece I loved, “Rock Drill” by Sir Jacob Epstein (shown at the top), recognized the dark side of worshiping the Machine. The piece began as a Cylon-style warbot atop a miner’s drill. Only a bronze of the torso and head, and photos of the original, survive, but it’s a warning sculpted of a nightmare about technology out of control.

As I looked at Epstein’s sculpture, a shiver ran up my spine. The things eyes wanted to light up, the steam-shovel head wanted to swivel in my direction on its metallic giraffe’s neck.

“What have YOU done to help make way for me and my kind?” It seemed to ask.

Test yourself: if you find yourself in London, get by the Tate Modern before this show ends on 20 September, 2009.
Posted by Iggy O at 1:46 PM