Tale of Two Iggys: Who Inspired My Avatar 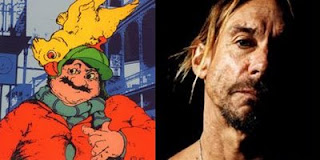 Hamlet Au posed the question after he noted Zoe Connolly's post about who inspired her avatar.

I'll join the game and continue the meme. I wish that someone as inspiring as Diana Rigg, Raquel Welch, or Sophia Loren had been my muse for SL. No, I went for the Godfather of Punk, Iggy Pop, and the strangest curmudgeon/picaro this side of Don Quixote, Ignatius J. Reilly.

Both figures spoke to me as ways to approach a world that, for the outset, I could see others taking far to seriously.

Whatever the excesses of Punk, it was about rebellion for the hell of it and questioning reality. Those are both hallmarks of SL. It suits those of us who want to subvert a popular culture on this side of the screen that seems vapid, consumerist, and doomed. Um...at times I think, "maybe it's both sides of the screen?" but then I get in my fake car and go for a drive.

Ignatius, the Rabelaisian genius of John Toole's A Confederacy of Dunces, likewise raged at the world around him, in his longing for simpler times (read: the Middle Ages).

If Iggy is the muse for my desire to poke fun, Ignatius is my muse for avoiding being too self-important. He was, in the end, a lazy and self-centered slob in the midst of a sea of stupidity.

So far, SL has proven smarter and edgier than I'd thought it might. I hope that continues. I find neither the Iggy nor the Ignatius in me coming out to play that often. That's a good thing.
Posted by Iggy O at 1:58 PM