Thinking About UT and Second Life 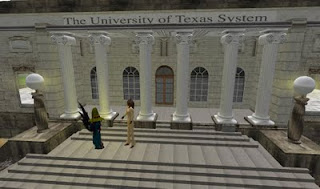 Location: In the Throes of Campus-Envy

When Pathfinder Linden announced that the University of Texas system would, in a year-long project, be bringing all 16 of its campuses into Second Life, a turning point occurred in the history of virtual worlds. Pathfinder and Dr. Leslie Jarmon (SL: Bluewave Ogee) are shown above (image cribbed from the Linden Lab blog).

[I]t's what I've called an embodied rapid collaboration platform, providing researchers, instructors, students, staff, and administrators access to one another in very new ways across geo-spatial and brick and mortar boundaries. Second Life itself is an open-ended complex learning system, with massive user created content, continuously moving the horizon of what known or understood. Finally, and powerfully, Second Life gives educators and students the developers tools, thereby making Second Life a tool-making tool itself. It has inherent robustness.

Perhaps my recent post about increased stability in SL is not merely personal perspective. I will be watching the UT experiment to see how students with laptops fare in SL, as well as how admins react. Many of them have only heard two-year-old press about lack of scalability and rampant adult content.

Yet Jarmon must have anticipated just such pushback. She salutes the " foresight and boldness on the part of the Chancellors," and that may carry the day during this experiment. I'm also encouraged by the systematic approach at the UT system. With IRB involvement, as well as campus leads meeting to plan for the development of their archipelago in SL, it's a good guess that faculty development will be happening for classes, activities, and student-orientation.

I believe "he" is a "she" in this case but an understandable mistake.