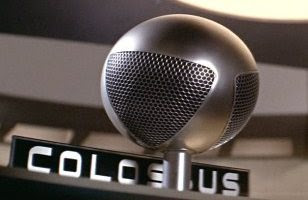 Location: Between Fear and Wonder
image from Collosus, The Forbin Project

I've always feared The Singularity, a.k.a. "The Rapture of the Nerds," when human consciousness could finally merge with that of a machine...the final upload, if you will. I fear it because of my ecological bent and training in speculative literature. We humans worry about AIs replacing us, but what of the creatures who have known this planet for millions of years? To AIs, would biology become merely raw material? To badly appropriate Philip K. Dick, "do algorithms dream of Shenandoah National Park?"

Such questions may seem alarmist, for my humanist readers who are not in Second Life or reading literary Science Fiction (shame on you), but The Singularity is not new or confined to the pages of paperbacks. The Singularity has been the dream of Ray Kurzweil and others like him for some time. I'm met a number of SLers who would gladly become their avatars, 24/7, even at the current cartoon level of embodiment.

I'd go so far to say that Science Fiction remains our most important genre of literature because, as Bruce Sterling put it in the late 80s, our age is the first to feel like SF. My students, when they hear about Kurzweil's and the Transhumanists' strange dream, mock it because--for now--they are young, trim, have perfect teeth, and use their parents' insurance policies. Yet their generation may be the one to build a working AI, as soon as their hair falls out and wrinkles crack over their skin like ice-feathers on a farm pond.

Now Philip Rosedale, a golden youth who resembles the suburban American Alphas I teach, and the utopian who founded Linden Lab to give us Second Life, wants to come at The Singularity from another direction. According to Hamlet Au's account, "a sentient artificial intelligence which existed in a virtual world" would complete one of Rosedale's ongoing projects, "The Brain. Can 10,000 computers become a person?" See Rosedale's company site, Lovemachine, for more.

I'm actually glad that Rosedale is after this goal, since I imagine that governments lacking his humanitarian streak can lay their hands on 10,000 linked computers and a number of good coders without much forethought. It would just be just another line in some intelligence agency's "black" budget, right after "new stealth first-strike bomber" and "high-res spy sats." I'd rather have Rosedale, with his world-changing goals and good intentions, build the first AI.

Or would I? Rosedale's site includes this mission statement:"LoveMachine is a team of people using disruptive technologies to very rapidly build things that can make money and have a shot at saving the world." Note the "very rapidly" and "shot" here. Unlike Einstein's God, Rosedale seems willing to play dice with the universe. What if The Brain does something different? Isn't that how Skynet emerged in the Terminator films? How the Matrix became self-aware? How Collossus, the prototype for all of these technologies (well, perhaps Forster's "Machine" takes first credit) was born? Well meaning people can still wreck civilization; even without thinking machines, each of us pushes civilization closer to the brink daily with each gallon of gas or pound of coal we burn (and America consumes at least 20 million barrels of oil a day).

Yet someone is going to try to build AIs, and many smart people have already been at it for some time in places like M.I.T. I lack the computer-science skills to begin a technical critique of a "virtual AI" made of 10,000 linked computers, so I'll move ahead to what such a creation might mean, were Rosedale to make The Brain.

The original idea of an "avatar" in C.S. circles was a program that would do things when its owner was otherwise occupied. An AI might be able to not only let me know when Dominion Power's bill has appeared in my online banking account but also advise me of ways to manage power-consumption in my house by roaming its power grid, using sensors to check where, for instance, I missed insulating a corner in our crawl-space last year. Then it could go shop for the best products to fill those gaps, while getting quotes on energy-efficient windows to replace our 60+ year-old panes. Iggy would log on to SL and have a chat with my AI about how to move forward. Through Iggy, I might authorize it to negotiate with window-makers and get quotes on the best products. It would search out some eco-friendly insulation of the sort that I could not find last year. My e-mails to suppliers never got returned, and I went on to other matters, buying fiberglass bats at Home Depot. The AI, not needing to sleep and unable--one hopes--to be bored, could keep at the customer-service desks--or AIs--until answers arrived. Meanwhile, I'd send the AI an order to dispatch nanobots under our house to kill the last Camel-back crickets that have been such a nuisance and have evaded my sticky-traps and chemical bombings. The nanobots would not kill any spiders, since we enjoy their hard work at killing other bugs.

Even my students get a little more excited when you talk about AIs in these terms. We allow other machines, and the hum of constant networked contact, to fill our hours so completely that we lack time to do what I've just described. AIs would take the tedium out of a networked existence as surely as the washing machine took the tedium from what was once called laundry day.

And if only it would stop there. As Ruth Schwartz Cowan so convincingly argued in her book More Work for Mother, the advent of labor-saving household devices had a side effect of ramping up expectations that we'd all complete more tasks in our drudgery-free time. Cell phones unite, but they also enable tiny women in giant GMC Suburbans to be distracted while driving, even as they convey to planned activities the toddlers in the back of the rolling fortresses.

I'm not confident that the time released by our AIs would make us a whit more leisurely or happy. Well, I take that back: they would if we made the machines serve us fully and fought like demons for any free time. I've done this with Internet technologies, taming my habits online and on the phone. I actually get some solitude most days and can enjoy the wonders of the natural world.

And that makes me a Postmodern freak in an ever-connected, scurrying world. I'm not sure AIs won't become just another, particularly powerful, example of Emerson's "things," that hop into "the saddle, and ride mankind."

I just hope Philip puts a kill-code into The Brain, so a human can always turn it off.
Posted by Iggy O at 2:11 AM

10 thousand computers? Can they reproduce Hamlet (the play, not the blogger) any faster than the proverbial monkeys?

Ray Bradbury wrote a short story (can't recall the title just now...) about the telephone system becoming self-aware, in his early career when the system was still electro-mechanical. [He also wrote "The Veldt", which, if you squinted at it just right, could look like a virtual world finding an interface with the physical. And don't forget "There Will Come Soft Rains", in which semi-sentient labor-saving devices are all that survive a nuclear war.]

David Brin's 1990 novel Earth presaged something that strongly resembles what the current WWW might evolve into. Then it concludes with a "singularity" event made possible by nothing less than a singularity -- a micro black hole orbiting inside the Earth, creating millions of loops of superconductivity in the mantle.

The point of this literary musing is that mere physical complexity of systems is insufficient.

Personally, I feel that the kind of AI imagined in SF will take its place next to the iconic flying cars the 1950s told us we'd all have by now... or self-sustained nuclear fusion (always a mere 20 years away, no matter when you ask)... or human colonies on the Moon and Mars: one more chagrin-inducing example of "The Future ain't what it used to be."

There you go again, Lalo--I *still* want my flying car.

I would not be sad if a true AI never emerged. I am sad about the lack of "reach" in space, however. My Apollo-era dream has died very, very hard.

Meant to come back to this sooner...

The last line in your blog reminded me of HAL9000 in the second novel of that series by Sir Arthur Clarke. Its title? Look at the calendar.

And yes, I'm just as saddened by the loss of those dreams, which for me began even earlier, with Willy Ley, von Braun's articles in Collier's, and Chesley Bonestell's iconic illustrations. I was 6 years old when Sputnik 1 launched.

Lalo, I shook Gene Cernan's hand shortly after he returned from the moon. Those men remain larger than life to me, if not quite the gods they seemed to a geeky 12-year-old boy.

Even then, it was bittersweet. It was hard, in 1973, to fill a hall with people eager to see Apollo astronauts. Interest fell off a cliff after Apollo 11.

I fear it will take a civilization with more of a sense of wonder, and mission, than ours to pick up where Apollo 17 left off.