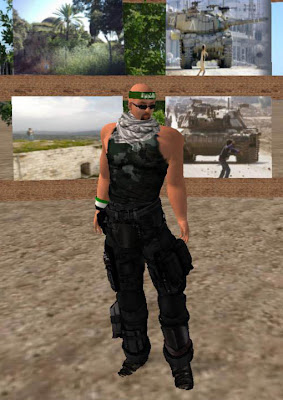 Philip Rosedale's first crisis, as Interim CEO of Linden Lab, may have arrived. I happened upon a huge controversy in the Linden Lab blogs today, over a site designed to protest Israeli tactics against Palestinians. I won't run the strongest images here, but the bodies of the dead are shown as prims draped in flags, and a captured Israeli solider is displayed in a cage.

At first I hesitated to go. I've some relatives who are Lebanese Maronite Christians and others that are Shiites. My Druze friends have relatives who fought on the side opposite my relatives in the Lebanese Civil War. So rather than editorializing my own strong opinions the ongoing conflicts in the Middle East, I'll just report.

So far, as I learned from the Linden Lab blog post, one item has been subject to an abuse report to Linden Lab. I understand that it depicts The Al Quds Brigades, the armed wing of Palestinian Islamic Jihad.

The creator, an avatar named Lord Ansar, permitted me to take photos and ask questions.

Iggy: you dress as an armed jihadi. Does this exhibit actively support that form of jihad? Or do you have another reason?

Lord Ansar: just because i like Mojahideen, i support them even with my look. . .its not somthing to be ashamed of. . . its something to be proud of

Iggy: Do you think that Linden Lab will make you remove this protest?

Lord Ansar: i wish that that they will not ... Second life is a full life like Real life with all thoughts and all sides every one can do his own Land i think i didn't put anything wrong here

Iggy: anything else you would like to tell my readers?

Lord Ansar: if Lindens ask me to remove a specific thing i will do

Lord Ansar: as they did they asked me before to remove killed children pictures and i did

Lord Ansar: i want all the world to know the truth of zionists and zionism .. because media is not saying all the truth

Lord Ansar: and wish that Palestine will be free again. . .one day we will live in peace

A wish for peace is probably all that most folks will agree upon in this debate. The site is going to stir many strong emotions, and perhaps some legal action, given the content. 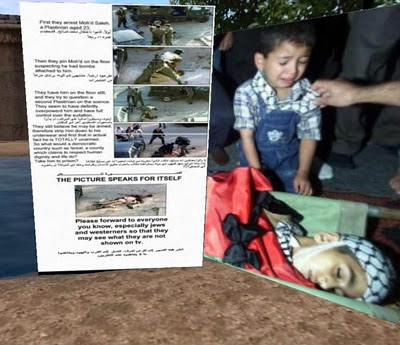 Do these pictures "speak for themselves?" Go and have a look yourself and decide (teleport link).

I have read that there's a growing Palestinian movement, including even Hamas and Hezbollah, for non-violent resistance to the Israeli government's tactics in the occupied territories. That would be worth an exhibit, too.
Posted by Iggy O at 12:52 PM