Thoughts about "Gaming Up" Second Life

What's the biggest difference between MMORPGs and virtual worlds? Making stuff. You can level up and buy things in a typical MMORPG, but you cannot make the world around you. That for me keeps me out of online gaming (though I'm considering buying an Xbox for driving and WW II air-combat games). My main games are face-to-face RPGs, often as the designer and GM for a campaign. I don't design too many game mechanics, but I do my own "sourcebooks." Essentially, that's been my calling in SL.

Of course, most of my fellow SLers are not builders or game masters. What will attract more of them? I want to riff off Scott Jennings' post on this topic (found via New World Notes). I fear that while I like most of his points (lower systems requirements, make the UI simpler) he misses the social aspect that keeps the demographic I know best--affluent 18-22 year olds--away from both virtual worlds and MMORPGs:

Serious games are for losers: that is the vibe on my campus and those of my colleagues. Gamer-kids make up at best 5% of my campus. I'm betting that outside of Computer Sci. and similar programs at larger schools, that's also the percentage. They've also been warned by adults for years some version of "game a lot and you'll never work a real job. You'll fail out of college, live in a basement, and clerk in a convenience store, if you are lucky."

I'm betting that, given the oft-reported plateau in World of Warcraft registrations, that they've reached geek-saturation. Mainstreamers on this campus will play console games, casual games, but not MMORPGs or, for that matter, play in virtual worlds. They lack time and the stigma of being "too into it" is too strong.

College kids already have avatars: themselves. The mainstream kids I know--this is an affluent campus--live avatarian lives already, thanks to parent-granted credit cards, nice cars, and weekend social scenes that rival Cancun's. The time required for serious gaming takes away from that and FaceBook, a time-hog if ever there were one, facilitates real-life contacts and rewards that bolster their social lives. No magical sword or cyber-hookup can compare. I'm betting that at larger and more economically diverse campuses, students have other distractions, such as jobs off campus, but also put real-life socializing, augmented by social networking, ahead of games or anything like them.

In addition to those two observations, Scott also skips a few key aspects that make SL hard to "game up": 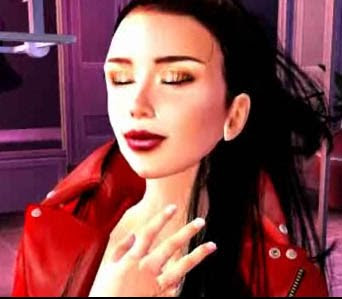 Virtual women are not (all) fat guys. I'd argue that a key demographic for Second Life consists of women who do not want to shoot stuff. Linden Lab will have to depend on its users to make games, since they don't do that sort of in-world content; the Lab makes infrastructure. Games to emerge need to involve puzzles and adventure more than hack-and-slash, and I base that claim on statements by actual women, academic and otherwise, who use the world socially.

I love the meme of "fat naked man in basement" as much as the next geek, but it's a stereotype of SLers and, for that matter, for many gamers. We need to lose it when we speak seriously about attracting and retaining an audience.

Sex sells, but only for a while. Sex is already a big in-world game, even though college kids seem bored or frightened of that aspect of SL. So I'm betting that the wistful (or cloying: you choose) promo for SL with the starry-eyed couple on the Eiffel Tower was aimed squarely at "the bored housewife," another demographic often used as a meme about SL. 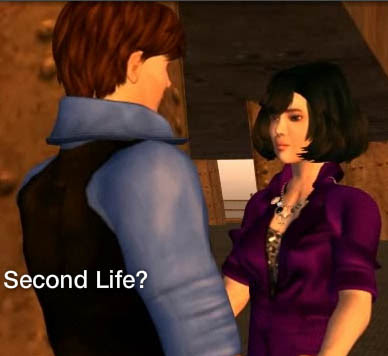 I bet that, in a year, that guy will forget to put the seat down at night, too.

While such residents exist, does the allure of cyber-romance have enough staying power to keep a hobbyist occupied for more than a year or two? The only SLers I know from this demographic have left it because of boredom, what Richard Bartle calls "drift" in his book Designing Virtual Worlds. So while sex sells, the world has to offer more than that. Bartle says it well; to be really popular such venues need "content so potent that people can be quite willing--indeed, positively enthusiastic--to repeat an experience over and over again."

Game it up the right way. Linden Lab has flailed around this issue, trying to promote SL by linking it to Avatar, then to the Twilight books and films. With a grid this big, if the Lab put some energy into themed gaming region where tier and lag were low, then invited the best content creators to build the initial infrastructure, they might have a hit on their hands. And get the physics to work, too: driving in Second Life is laughable. Why build those Linden roads if one cannot use them smoothly?

When Linden Lab has an intuitive UI, preferably Web-based, they need some splash. Perhaps some real cash prizes, in the $5-$25K range (chump change for a company like theirs), for a "SL Idol" contest? They could promote this in more mainstream venues; right now their ads only reach a niche audience.

The way it is, but better? Linden Lab has a product that cannot easily--as currently construed--become Left for Dead, World of Warcraft, or Eve Online. The Mainland continents could become a sort of "Lifestyles of the Virtually Glamorous," which has been enough to keep The Sims franchise going strong. Caveat there: my students look at The Sims as a game for teenage girls.

That is not the demographic that "Ancient1," who replied to Scott Jennings' original post, sees This SLer runs a business serving "tens of thousands" of SL residents:

My experience has been that I am predominantly meeting working class family people over 35 years old who pay for land and services in Second Life because its their part time hobby to be in a virtual world. You could say its an escape for folks who work hard, have life and family stress like we all do, and login to Second Life to just “drift off” for awhile in another world.

I agree. Most of my social interactions outside academia have been with folks who have good computers but not always the right educations to wield power and influence in the ever-more-stratified US meritocracy. They use social media often as much as my students, but they do not have the casual social lives that college kids experience, often into their late 20s. The older users who typify the SL base are smart and well spoken, but cannot own Harleys and go on exotic vacations. Maybe they want to play a warrior or a vampire for a while.

SL could then be their "game." How Linden Lab keeps that audience coming is beyond me. Perhaps the mass audience will never exist, as it does for Facebook. Erik Sass' post on the continuing existence of SL among a niche audience takes a contrary view :

In this arena a small, highly-engaged niche audience may be more valuable than a large, apparently indifferent one (Facebook, I'm looking in your direction).

Right now we cannot even keep the educators in SL, as we realize lower costs and more freedom to host and back up content exist on OpenSim grids.
Posted by Iggy O at 8:31 AM