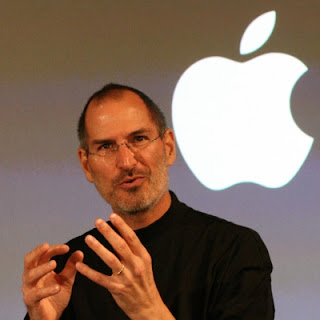 I wish Mr. Jobs a speedy recovery and a long life. While the man has been accused of draconian management practices, he did help usher in the personal computing revolution. Even if Steve Wozniak was the engineering genius behind the early Apple computers, Jobs' marketing brilliance made graphical user interfaces and the Cult of Apple happen.

It was a different sort of company from the upstart PC makers of the early 80s or the stumbling and arrogant behemoth that was IBM in that decade; if the competition consisted of geeks, Apple seemed run by artists and madmen of the sort I enjoy meeting for drinks.  I could imagine Apple's people chatting up the fire-breather and magician in San Francisco's Vesuvio, one of planet Earth's best bars, after shopping for poetry books at City Lights. IBM's folks would be (massive yawn) golfing with senators. Microsoft's people would show up at the bar and try to look hip, all the while looking like khaki-and-polo-shirted  tourists.

But I digress: my preference for bohemians over boring business and I.T. types is not news, but perhaps this is exactly how Apple fooled chumps like me into thinking the firm hip and not merely a very clever marketing idea wrapped around some elegant and useful technology. It sure snared cultural creatives as fanboys, to market the company's products to friends. I'm sure I convinced a dozen folks to try the Mac OS over the years. Not a one screamed at me later, a testimony to how well our Macs did, and do, work.


More Than Macs: How Apple Did "Think Different"

The history of the firm relates quite well to ideas from my class on the history of Cyberspace. Jobs will be remembered, when he leaves this planet to compare notes with John D. Rockefeller and Howard Hughes, in one of two ways.

First, Apple's CEO might be what what Tim Wu in The Master Switch calls a Defining Mogul.  That will be the case if Apple's closed system for handheld computing comes to dominate the future of Internet use.  You will get what Verizon, AT&T, and Apple decide you get to see or do. And I agree with Wu's well supported "central contention....in the United States, it is industrial structure that determines the limits of free speech" (121). I suspect this revelation about the first amendment applying to Congress, as in "Congress shall make no law..." and not to employers or ISPs, surprised my students as much as it did me.

On the other hand, if an open system dominates, Jobs might be recalled as a would-be monopolist who failed, despite a miraculous comeback in the late 1990s. I'm not sure which future I want. I used to fear Microsoft. I was hoping Macs would remain boutique systems for picky people like me. I also prefer German cars or pre-1973 Detroit Muscle. They are fancy fun, but they both run on our roads with boring cars. If my Mac could work with the sea of boring Windows boxes, what harm that?

Now, however, I am beginning to fear Apple.

My ownership of a handful of Mac systems since the dark years of the mid 90s shows how well they hold up. Our household iMac G5, now six years young, will soon enjoy a long retirement as our DVD player / media box for downloading films. Some child in Alaska is probably still using the G3 iMac I shipped up there, years ago, after an eBay auction.

Inside the latest iMac, however, there's a story that goes to the heart of Jobs' vision for Apple.  Unlike its predecessors, the new iMac's CPU has no user-serviceable parts aside from upgrading the RAM. This has long been Jobs' favored tactic. If the Apple II of Wozniak's day invited tinkering, the first Mac in 1984 became its antithesis: to open the case was the void the warranty!

Apple has played this push-pull game with its hardware since that time. As a tinkerer, I found this exasperating as my friends using Windows or Linux would build computers out of spare parts and make them do cool things.  Nowadays, however, we old geezers with desktop boxes are giving way to the iEverthing generation, who carry their devices around incessantly and don't tinker. It's about the app, not the device, to these kids. And Jobs--who not only could recognize but also create markets--knew this best of all.  The Mac's established niche among school teachers and artists and graphics designers and video professionals and crazy professors is, after all, somewhat limited. Apple did not even try to top Dell's game in Henrico County, where the middle schools will give up their Macs soon for PCs, just as the high schools have done. Though the Macs last longer and are more robust when dropped by little kids, Dell offered a better price on service. Apple declined, I suppose, betting that kids with iPhones and iPads will eventually want Macs, anyhow. Or that iPads might replace laptops in schools, and with the right Verizon contract Apple would best anything Dell could offer.

The educational discount, I just noticed, for the iMac I am considering comes to all of 100 bucks. It was once twice that. Second Life folks...does this sound at all familiar?

This reality suits Steve Jobs fine: his portable devices, selling in volumes we Mac zealots could only dream of in the late 1990s, are closed in ways Job could never manage with the Macintosh in any form.  We'd pry them open.

Try that with an iPhone. Maybe you have better eyesight than I do. Besides, even if  you do that, Apple's revenue-stream will switch from selling you a $2000 iMac (high end: I like my computers pimped) to selling you a $200 phone with a long-term contract that includes a cut for Apple with each App you buy and, I'm guessing, a bit of the monthly take that goes to the ISP carrying your data.

That's a sweet deal for all the corporations involved.

Consumers might not care, as long as the service is reliable, but as with AT&T before the 1984 breakup, with the iOS Steve's firm can dictate which apps appear, or do not, on the system. The Mac OS lets you write software; its relative openness, based on its UNIX underpinnings, compared to Windows has been great for those who had the skill to develop applications.

But What if Steve Loses (Again)?

Jobs lost the desktop market to Microsoft because he could not see what Bill Gates saw: that the software was the key to market saturation, even good-enough software. Most Windows users wanted the apps, and they could care little about the OS as long as it worked. I know that described me when I used Windows 3.1, 95, and 98 before making the Mac OS my primary system.

Could Jobs make a similar mistake today? As Google becomes more and more a competitor for the iPhone's and iPad's apps market, Apple could repeat its 1980s blunders. At the same time, it has some advantages it never had then.  Moreover, might Google  be forced into a more closed system? As I explained to my class today, Google must use the same broadband "tubes" (thanks, Sen. Stevens) to move data to one's computer or phone.

I'd feel better if I could get an Android OS tablet (what I'm waiting for) with service from any of dozen ISPs. Perhaps if some new and distruptive wireless service emerges, offering FIOS-level speeds without a cable, we could have 100 Verizons or Comcasts vying for our telecom dollar.

But in my region, it will be AT&T and Verizon carrying the data. As long as principles of Net Neutrality continue to hold for these big telecoms, in theory iPad / Phone competitors could run most anything and undermine Apple's closed-but-reliable model for access to content online.

If that happens, someone will have stolen Apple's message from the famous "1984" advertisement. I offer it here in case my students have never seen it:


I'm hoping for this outcome, even if it means that in a few years, I'll lose my Macs as Apple fades away (again). Maybe for my main computer I'll be running an admittedly sleek Sony Vaio with a Google OS on board and I'll have lots of options, including synching data with a tablet or smart phone. Maybe I'd even make peace with the old bogeyman, Microsoft. Windows 7 and clunky compared to the current version of the Mac OS, but it is the first version of Windows in a long time that I find compelling and rather intuitive.  Perhaps on a really tricked out machine...

Either way, if I can open the computer's case and change the hard drive out or upgrade the processor, better still.
Posted by Iggy O at 1:09 PM