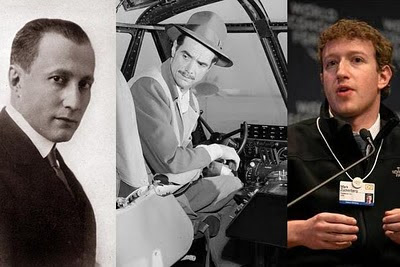 Location: Using Google's System to Talk About It

This post begins a series to coincide with my Spring 2011 course, Cyberspace: History, Culture, Future.

We begin the class reading Tim Wu's The Master Switch: The Rise & Fall of Information Empires. I've loved Wu's narratives about the "defining moguls" in various industries. In my title I misused the term "founding" and that is not exactly apt. Such men may not found an industry but they do bring it to its apotheosis.  It's not accidental that Howard Hughes, whose company defined modern aerospace, continues to inspire Hollywood enough to get The Aviator made and released.

Such figures used to be called "Titans of Industry" in prewar America.  Either way, the metaphor is apt: Mogul emperors and pre-Olympian gods had one thing in common with these modern men: mere money has never been the primary goal or motivation. They are, Wu, insists, "a special breed" among the alpha-males and (today) alpha-females of our technocracy (29).

The mogul or titan of old desired power and domination, and their modern counterpart, "like a man who tastes combat for the first time, discovered his natural aptitude for industrial warfare" (Wu 29). No small wonder that they so interest Nietzschean me. I admire such fellows even when I dislike them: Steve Jobs made possible the amazing MacBook on which I compose this post. He also has a scorched-earth style of management that would make Kublai Khan nod in approval. Moguls are often brutes (and the titan Saturn ate his own children to avoid being deposed by one of them).

Adolph Zukor's and Mark Zuckerberg's names roll off the tongue, the similarities in vowel-sounds mimicking the same will to power that these men  brought to their innovations. Both Paramount and Facebook define a certain age of media. Competitors quake.

Then, of course, there is the fall of the Titans. In surveying the history of technology, it is common to find founders with Shakespearean flaws and, quite often, trace what began as heroic competition ending  in complacency, decadence, even madness. Aviator and Aerospace-industry legend Howard Hughes stands before me, an obsessive old man so terrified of germs, some urban legends say, that he put empty Kleenex boxes on his feet as he shuffled around his penthouses in various the Las Vegas hotels. Thus is the fate of many with imperial visions.

If any Second Life readers are still with me, I think you know who I'm talking about.  For my students, the question becomes this: what happens when a founder tries to build a system out of a disruptive technology?

Zukor managed to corral and cow the independent filmmakers and theater-owners who successfully battled The Film Trust. Out of that victory, Zukor and other winners made his system: we still use the world "Hollywood" to mean not just a place but a content-creator that is monolithic and quite often stodgy. Consider how every formulaic superhero film resembles the previous formulaic superhero film. We can thank Zukor and his peers for this.  But we can also thank them for some unforgettable moments in cinema: Ben Hur's chariot race, Dorothy's trip to Oz, A Streetcar Named Desire's heart-rending portrayal of Blanche DuBois by Vivian Leigh.

As for Facebook's Zuckerberg, it remains to be seen if his social network can become a fully fledged operating system for users, in the way that Google seems to be evolving. If so, we could have a ringside seat for a battle of systems, one that will influence our lives as much as the ascendancy of the Hollywood Studios, Microsoft's Windows OS, or Detroit's Big Three automakers.

Update  Jan. 13: I've clarified Wu's term for these men and added a properly MLA-cited direct quotation from Wu to add emphasis to my point (and to demonstrate proper integration of sources to students). Note to students that the first citation of Wu does not need his name with the page number; I already made clear the source's name. The second citation does take the page number because the source is not yet clear.  The same rules apply for paraphrase.

I have serious problems with facebook and places on the internet that requires you to give away your real life identity. Google does not do that I think (?)

DS. Im really close now to step out of Facebook to be honest...
(Im having a posting about this tomorrow =)

Iggy wrote:
"[...] some urban legends say, that he put empty Kleenex boxes on his feet as he shuffled around his penthouses in various the Las Vegas hotels. [...] If any Second Life readers are still with me, I think you know who I'm talking about."

LOL @Tenchi..Howard Hughes lives on, it seems, in Springfield :)

@Kranfel, real-life identity? It's an issue to us who have been targeted so many times by marketers.

I doubt that the students from my FYS class even care. Facebook is how they organize their lives even as it hurts their grades.

They are used to having zero privacy online and seem to live in a hive of constant contact with friends and parents (something grumpy Gen X me hates). But they are young and not yet beaten down by life. They may need some solitude in their old cranky years :P

He lives on and even has his action figure *G*

Well as for the sharing of private Infos ... no Facebook or any other social network for me (even though I had some camo accounts to try out the hype). I prefer my personal info not to be distributed freely over the internet ;)