Poll Results 2012 of Education and Land Use

Here we have the results from 35 recipients who took the poll. Last year, I did leave the poll open longer, and as a result in 2011 I had 104 responses.  Perhaps this poll might have included the option that one respondent noted, namely "we own the same amount in SL as we did a year ago."

I like that idea, but I wanted to 1) repeat the questions as posed last year and 2) abide by the nine-question limit that Vizu provides for free polls. Here are the 2012 results: 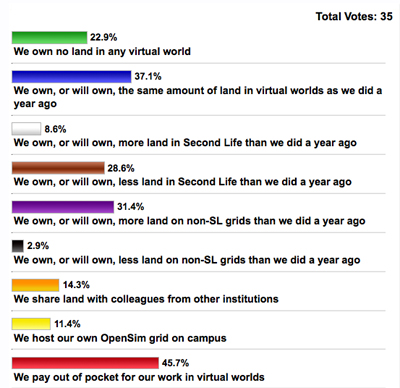 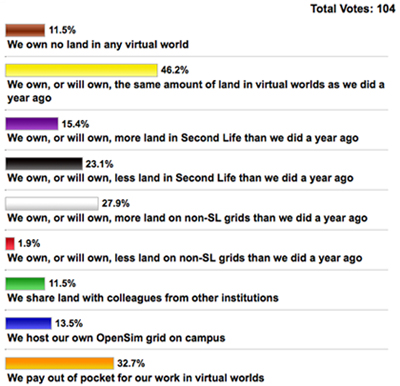 I hesitate to draw conclusions from a small sample size of 35, for a poll advertised on two e-lists related to virtual worlds. The data suggest that more people are paying out of pocket and more people in the past year, as compared to the  year before, have given up land in Second Life after the tier-discounts for education and nonprofits ended.

I do not know who to interpret the "own no land" results. It's possible that many of the respondents are new to virtual worlds and have not made a decision. They may, in fact, be sharing parcels or islands with others, a result that is little changed from 2011.

An educator in the VWER group suggested that I poll educators again in the summer, when the two-year contracts for reduced tier end.  I would also like to know where educators have do their work, both in SL and outside it. Some questions worth asking: