GUEST POST: In Spite o' Cheapskate Linden Rascals, Why I Still Loves Me Some SL 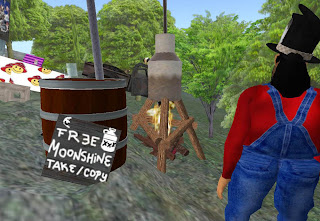 Now ol' Hamhock Au done commenced to a-fussin' and a-hollerin' (which am fun) about how them Linden Lab go-rillas am horrible cheapos who won't pay you nuffin' for writing them a blob. It am a reg'lar catty-wumpus of a fight over why them San-Fran rich tech-weenies won't pay us poor fat nekkid men in trailers and basements nuffin' to write down a blob for them.

Well sir, Iggy am cheap and a rascal, too, but he do let me and my rotten horrible family squat on his land in the fake world o' Second Life. Keeps us from killin' folks on the highway, though we do still beat 'em up and take their fake money.

So why in the Sam Hill do any real natural-born human-being person stay in this fake world, after them Linden go-rillas am always screwing stuff up? 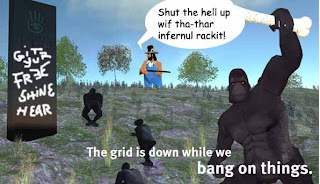 Now I will tell you, I still enjoys the hell out o' Second Life. It am the most fun you kin have as a hillbilly hellion.

Cornsider my fake life. I done me time in jail...with my horrible rotten sister who beat me senseless wif a 2x4 wif nails in it.

And that were when she were happy wif me. We done won in fake court, of course. I gots me the best fake lawyer in Second Life and his legal assistant, a two-head prim baby I done rescued from a prim-baby graveyard. 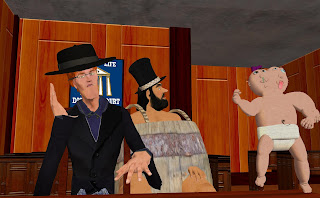 Them Lindens am awful...they even dumped a love-child of ol' King Philip in that graveyard and more. So I opened me a prim-baby adoption agency.
But despite that-there horror, I ain't never gived up on Second Life.
I done tried to open me a business as a breedable animal when that were big. I did not have me much luck, even when I lowered down that-there price. 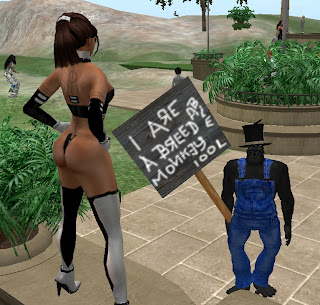 My last antic were to be a hot-hot-hottie male model for the Alphaville Herald. It were last year, for Valentine's Day. My male model career ain't gone nowhere yet, but I ain't done foolin' folks or writin' blobs, neither. So don't let them Linden cheapskates ruin your fake life.
Git out there and have you some fun. Tell 'em Pappy done sent you (and run fast). 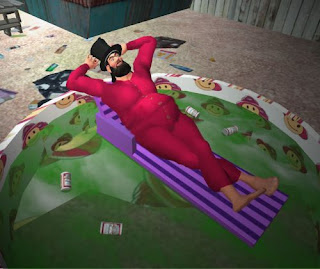 Thank you and mighty obliged, Iggy. I'll put out the fire on your fake land now.

I works mostly as a male model now, and am one
Posted by Pappy Enoch, Hillbilly Savant at 7:37 AM