Okay, I got on my bike, bald and de-primmed, unscripted and ready to roll.

It actually went well. Too well. With draw-distance out far but with graphics tuned down, I would even get up to 100 kph on some straightaways.  I did "bounce" at some sim-borders but never wrecked the bike. I even saw one avatar, in the middle of the road, and I dodged her while she changed her appearance. Now why DO folks go to the middle of a road to do that?

Fool that I am, I decided to return in The Machine That Must Be Worshipped, my '67 Black GTO.

Oh, what a mistake. Every baddy-bad from my last attempt returned to haunt me. Fail #2 for Mr. Billy Badass.

But first, while on the motorcycle, what DID I find along those Linden Roads: Crap. Crap. Same old crap as in 2007 or 8.  I've concluded that the Mainland is a wasteland.

First, a billboard that supports the idea that SL is the ideal playground for bored housewives. Say, where is Betty Draper when you need her? 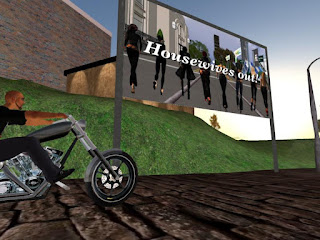 This is not Betty. She's a Betty-bot at a rather squalid place to get money by entering raffles and contests. 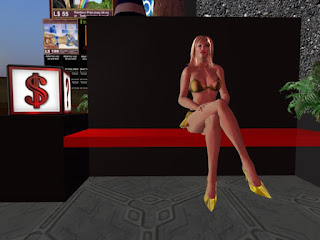 Here's another shot from a den full of ugly avatars and "games of chance" that Linden Lab permits under their TOS. To my untrained eye, these scenes possess the wilted sadness of a senior-citizen bingo parlor, without the good cheer or aged avarice (those geezers can get testy...trust me). 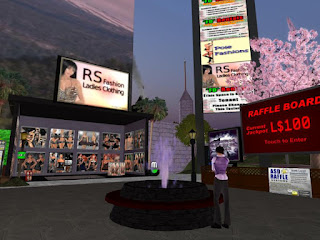 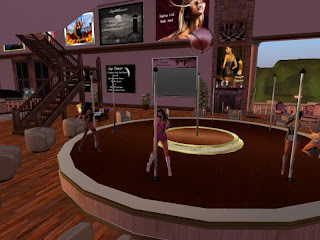 Funny thing, that. When my campus built a parcel on the Sansara mainland continent in 2006, it was next to a casino with pole dancing. Same old, same old.

The trip home was a mess after I found a rezz-zone and switched rides. At any velocity over 40 kph, I crashed repeatedly into gullies and houses, until I got flung to the corner of one region.  I logged out. 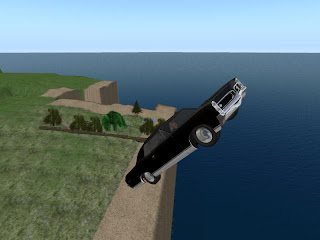 Then today, a message in my inbox:

"Your object 'GB7 67 PMD Goat (Black)' has been returned to your inventory lost and found folder from parcel 'Deadly Sin' at Mitta 96, -1 because it went off-world."

Deadly Sin, indeed. I didn't even tip those dancers!

From a Tripod (remember that?) website, a definition of "Sansara": The rounds of birth and death and rebirth, reincarnation. Cyclic existence, the beginningless and endless wheel of rebirth. The world, the realm of desire.