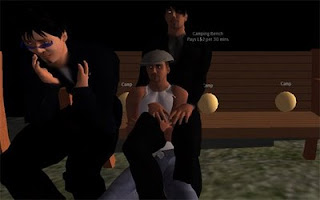 Mary (not her real name) feels picked on. Her mall and club would have been typical in an earlier era of SL, when mainland sims often hosted businesses that encouraged camping. Often enough campers and regular visitors piled in to make the region fill up, and other SL residents could not get in.

This got Mary in trouble. When a neighbor complained about the lag and the filling of the region, Linden Lab came in like a SWAT team.

"They left me the camp master and 6 camping chairs, Then returned 12 dance pads, 4 beach towels to my lost and found folder before they disabled my account," Mary told me in an e-mail. "My staff told me they shut the Sim down to do this."

While she got off relatively lightly--a one-day suspension--she claims that she also did not first receive a "Warning, followed by Suspension," something Linden Lab notes in its Community Standards (see "Disturbing the Peace"). She got the warning and suspension all in one notice.

Here's the note she got:

Disturbing the Peace - Camping Chairs Linden Lab desires that the Residents of Second Life share all simulator resources fairly. It has been determined that your use of objects generally referred to as camping chairs is either adversely affecting region performance or preventing access to the region which is a violation of the Disturbing the Peace portion of the Terms of Service. Your camping chairs have therefore been returned to your inventory.

While some sim-owners park a pile of zombie-avatars near their business to put dots on the map and attract traffic, Mary's club does not use this approach to bring in visitors. She has a pole-dance/escort service that brings in adult-themed business. She also needs customers to buy goods at the shops, and she's tried a number of strategies:

I been trying to encourage people to come buy what I sell or rent a shop in my mall, also have advertising displays too, have to keep the traffic numbers up to get shop renters. One thing I have been putting in is Lucky Money Chairs, and traffic seems to be a little better since I put that in. My traffic was around 35000 or so, but now its down to around 22000. So in effect when they did this, it caused my traffic rating to drop.

Linden Lab hurt Mary's employees by returning not only camping devices for visitors but also dance-poles that pay Mary's staff a few Lindens each hour, while they dance and flirt with club-goers. Mary plans another system to pay her staff now.

I expect a few snarky comments about "a crisis in a strip club," but a business is a business.

Losing access to her account means real problems for this owner. She adds, "I have thousands of dollars (Real $) in the inventory of my account and I don't want to lose that."

The camping probably attracted too many zombie-avatars, who converge on places with open chairs, beach-towels, and dance-pads. They stay around, afk, when their camping spot maxes out and another camper takes their place. Thus a sim fills up quickly. It's not uncommon to see campers who are afk piled up like cord-wood on a camping bench (as in the pic above).

There is no perfect solution to the camping issue. Most SL residents who comment on blogs about camping hate the practice; at New World Notes and The Alphaville Herald, readers regularly call on the Lindens to ban the practice.

Perhaps Linden Lab is being preemptive, and heavy-handed, with owners like Mary in order to warn the community. With only 100,000 or so regular SL users, we are a small town with a great telecom network...and a better gossip network. So rumors and news travel fast.

What CAN be done about camping? Even at camping sites like HippiePay, that transitioned to a bot-resistant system based on IP addresses, other troubles followed. HippiePay, Welfare Island, the The Pharm--all popular sites with their own islands--closed in the past six months when they began to lose money.

Campers--noobs, bots, and others--are being pushed into fewer and fewer locations. I expect many more stories are out there like Mary's. Until Linden Lab comes up with a better system for search and classified ads, what the company decides to do about camping will have a large impact on business owners who use it to drive traffic.
Posted by Iggy O at 4:25 AM