Dispatch from a Vampire-Hunter 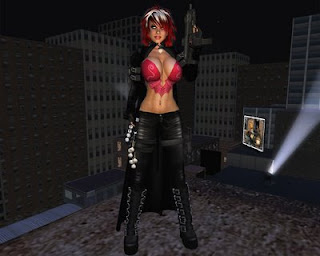 Iggy's Note: We here begin what I hope to be a series of dramatic posts from one part of the in-world roleplaying community...or is it only a game?

I’m not talking symbolically either, like how serial killers or politicians or someone’s mother in-law is a monster. I mean the kind of monster with claws and fangs, horns and leathery wings. Yes, you heard me. They are real. Now, for those of you who are still reading this, you fall into two categories. The first category is made up of people who think this is a joke, or a piece of fiction, or just some nonsense from someone who likes talking bullshit to pass the time. You’re not going to take any of this seriously. It’s going to be purely entertainment for you, nothing else. I’m fine with that. Have a nice life, for however long that may be. The second category is made up of people who know exactly what the fuck I am talking about.

You know. You have seen them.

It’s really kind of funny. Parents used to prepare their children for that horrific moment when they came face to fanged face with a monster. They used fairy tales: Little Red Riding Hood, Hansel and Gretel, Jack and the Beanstalk. I mean, the old, old stories, the ones that taught kids to observe, improvise, and act swiftly, before they got eaten alive by a werewolf, or a witch, or some other terrifying fucker. And then one by one, all of our storytellers started losing their balls and self-censored themselves. All of the old fairy tales got sterilized by uppity people who thought it would be a better idea to entertain kids with shiny, happy stories rather than save them from getting horribly killed.

And now? Now there isn’t anything to fear. Monsters aren’t real, right? Thank Jim Henson for that. Monsters don’t eat children anymore, they eat cookies and sing the alphabet song and laugh when we tickle their fucking bellies.

Even in the face of cold evidence, people don’t believe. We can upload shit to Youtube or Facebook and share movies and photos of whatever it is we experience. Even monsters. Even people dying because of monsters. And what do people say when they see reality in all its gory details?

FAKE. It’s not real. Photoshop. Digital trickery. The shadows are all wrong. Blood doesn’t splatter like that. That guy isn’t animated right, he doesn’t even look human.

People have somehow repressed the very thing that has kept the human race ahead of these ancient predators for the last millennia: Our survival instincts. People have become too reliant on science, too reliant on technology to notice the dark things that lurk in the shadows. That’s how the monsters are going to win, and feast on every last one of us.

Except for one thing: People like me. We bring the light of hope into the shadows. Also, we kill the fuck out of every monster we come across. But mostly it’s the hope thing.

It’s a thankless, lonely, and brutal job that we have. Most of us don’t live to see middle age simply because as we get older, and slower, and weaker, the monsters don’t. Sometimes it’s the very people we protect that get us killed—just because we know the malicious fucker we had just staked through the heart is a fanged beast, doesn’t mean the cops arriving on the scene of a witnessed “homicide” pointing their guns at me knows that. I’ve had one too many friends end up shot to death by police officers, or worse, end up in prison.

So, now you know the truth. The truth about the world, about the monsters, and about the people that live and die trying to keep the monsters from eating us. I’m not really sure why I felt like blogging this, except for maybe that I’ve lost a dear friend of mine last night. There are precious few times when someone like me affords themselves the weakness of loving someone else, but dammit, I couldn’t help it. And now that person is dead, and all I have left are my tears, my emptiness, and a burning rage to find the monster that killed my friend and fucking tear it to pieces.

I guess I’m hoping to spare whoever might be reading this the agony that I’m feeling right now. But I’m not going to beg and plead for you to believe what I’ve said. I’m tired of trying to convince you, so either listen to me or don’t. It’s your funeral.