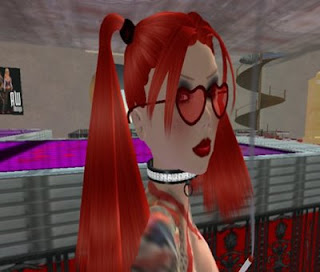 I'm interrupting my blissful exploration of Armada to consider the bombshell (not bad-girl Hojo Kilda, pictured above) that exploded yesterday, with the Linden Lab announcement that certain adult-themed content would be relegated to a new continent, and that other such content would have to be placed in regions that age-verify all entrants.

I posted some mustings to New World Notes as an overly long comment. Here they are, edited a bit:

Many European colleagues are laughing at Americans' puritanical hand-wringing over adult materials online. They should. We are a repressed and fretful people.

Meanwhile, lots of US academics are teaching in and with SL, and more of us--deliberately frumpy fashion criminals, mostly--are on the way in tweed jackets and would-be-hip "Foucault" eyewear. This pushes LL to do something, since they are courting the .edu market.

A few factoids from my perspective as an SL eduator:

1) Utopian educators among us resist any notion that the adult content of SL hurts them. Right now they may be correct. The new policies won't hurt these "Oh Brave New World!" sorts.

2) As more US colleges and universities come in world, the "in loco parentis" culture of some campuses will collide with SL's libertarianism.

3) Schools with savvy I.T. folks and hip admins will not fret. My own school is cool about the adult content; the new president, meeting me about our writing programs, recognized my wallpaper as a screen shot from SL. He recognizes its potential for education.

4) Students don't really care. They mostly chuckle about sex in cyberspace or find it mildly "creepy" (a bit of groupthink that has been drilled into them by "helicopter parents" and zealous counselors).

5) That "creepy" adjective indicates how some administrators and hovering parents will regard SL once it appears their already long worry-lists.

6) Cautious admins at many schools, responding to parents and state government (rather than spontaneous student interest in SL, which is light) will push LL to "protect our customers...I mean our children." I've been asked a few times from folks at such schools how the "X rated stuff" in SL leads to resistance by my administration. It doesn't--see point #3.

7) If LL wants to keep growing in the .edu market, they had to do this, if only to permit US first-years who are 17 years old into SL. I don't believe for a second that the Lindens won't lower the age-of-consent, I mean registration, in SL.

Courting higher ed could be a fatally flawed move. I can only see the small picture for my own teaching, which has gone very well in SL, if student evaluations and measures of improvement in their writing abilities are to be trusted.