I've been invited to write about this virtual world, still in Open Beta, and so far, I enjoy what I'm seeing. The only caveat is that under the agreement to be a MetaPlace Evangelist, I'm only supposed to write "favorably" about it.

That is fair enough; so far my limited experience means I'll limit myself to discussing features and initial impressions of the virtual world.

1) The browser-based client means low hurdles for graphics. It's an apples-to-oranges comparison to Second Life, of course, which strives for immersion even as ever-increasing graphics requirements strand some residents. Even my own laptop is gradually getting less able to run SL.

Metaplace's client, however, doesn't even make my laptop's fan start up. If the graphics seem simplistic compared to many stand-alone games and worlds, consider what it does provide: a place with user-generated content, chat, IM, and a currency.

The Metaplace client's default settings provide a word-bubble for my chat as well as a chat window with tabs for the current world or the entire universe...I guess it's rude to overuse the latter, like some group-chat spammers do in SL. 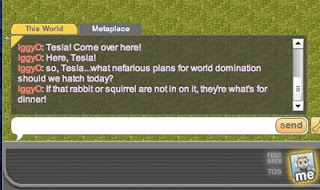 System requirements aside, I like the clean simplicity of the Metaplace client. At the bottom I see Iggyo's "Coins," a currency Metaplacers can exchange for goods and Metacred, a total that levels up the player as soon as the yellow bar fills. I've earned Coins and Metacred so far by visiting a few other worlds, posting messages, and spending time in-world planning world domination.

Every mad scientist, even a 4th level one, needs a) a bunch of machines with blinking lights plus b) a dog named Tesla.

3) Immersive? We'll see. Fun? Yes. I don't think I'll identify with little Iggyo anytime soon, or lose myself in being him. Is that a bad thing? My students have an initial reaction--naive and childish in my opinion--that SL and other immersive worlds are "creepy," a little mantra that must have been drilled into them by hovering and overprotective adults. I don't think anyone would find Metaplace creepy. Silly? Perhaps. But some of us like silly, as long as it's silly in a playful and clever way. Luigi yells, look out, Mario!

I grin whenever Tesla sniffs me out and comes over to stand with my little bobble-head.Tesla, the squirrel, and rabbit were free from the marketplace; they all have simple movement scripts that follow me, in Tesla's case or, in the squirrel's case, flees when I get too close. Tesla seems uninterested in killing squirrels.

I'll work on that if I can figure out how to script...and put in a vegetable garden.

4) My Small Piece of Land. So far, every Metaplace player gets his or her plot of land, called a world, when the register. That's a wonderful feature reminiscent of the First Land initiative that Linden Lab had a long time ago. Some residents still lament its passing.

5) One Final Graphics-Grumble about SL. As gamelike as Metaplace seems, it offers utility that was missing during my crash-prone April road trip in SL. If mainstream users like my students--who primarily use laptops--are ever going to use a virtual world widely, the world cannot require frequent hardware upgrades as a prerequisite for full engagement. Linden Lab has not addressed this issue as they keep updating their client software.

If Metaplace or browser-based worlds like it can develop the sort of detailed and pedagogically useful materials I see in SL, and if a world like Metaplace could be embedded into a Course Management System like Blackboard, then Linden Lab had best worry.

There's a bit of arrogance at work when experienced SL residents reply "buy a desktop tower and swap graphics cards as needed." No, I would rather go play in my garden and quit SL at home. I'd just have to enter it from a high-end lab at work and reduce my time in-world.

And look for alternatives for my classes.
Posted by Iggy O at 1:47 AM