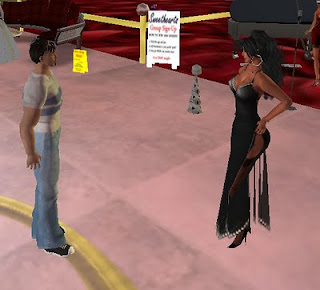 My students are no longer noobs. They have done a great deal of thinking about virtual worlds, and almost universally, they give Linden Lab's attempts at marketing a HUGE thumbs-down. Here are two standout blog posts.

From Ryan:
"Just recently I was talking to one of my friends across the hall. I was talking about how we use Second Life in class to help us with our writing. My friend said something along the lines of “isn’t that one of those games that 30 year old losers play in their mom’s basement?” It is this image that is hindering Second Life’s advancement in the communication technology front. To someone who doesn’t know anything about Second Life, he had the 'creepy' vibe. Linden Lab needs to fix this, and use their money to better promote Second Life, not as a serial killers paradise or loser hot spot." Read his entire post.

From Jenna:
"The credibility of virtual worlds is not yet known by the mass public, especially among the instant message- texting- Facebook generation, which I am a part of. I had to explain the existence of Second Life to every friend I mentioned it to because they didn't have any knowledge of it. This shows a serious disconnect between virtual worlds and the real world. Word of mouth is not nearly enough to promote its existence and potential as an educational and communication technology." Read her entire post.

From Caroline:
The biggest problem SL faces as a communications technology is the unappealing light it has been portrayed in in Hollywood and the resulting image "non-SLers" gain from these shows. I know first hand because I was one of them. I think a lot of people are hesitant to join worlds such as SL because they are afraid that they too will end up with a stalker or worse. There are a lot of skeptics out there, and I think that unless Linden Lab makes more effort to put SL in a more positive, less "serial-killer" type light then it will slowly begin to die out. Read her entire post.

From a Few Students about Facebook vs. SL:
It may be naivety, but they trust Facebook profiles more than they do profiles in SL. With Facebook, the students claim it to be harder to conceal one's identity. Interesting point, but I'm not convinced. One can construct a completely bogus life at Facebook with the right photos and activities, while still giving the company valid information when setting up one's account. Granted, that is harder than in SL. But a very clever Facebook impostor might never be sniffed out, until someone met the person face to face.

My pro-bono marketing advice to Linden Lab:
Just get us out of the "creepy treehouse." I'm not convinced LL can do this, ever, with a product called "Second Life." Other virtual worlds have more fortuitous names.
Posted by Iggy O at 7:50 AM

It's inevitable that people fear and ridicule the unknown. Some will have vested interests, inadequate kit or be too lazy and use negative perceptions as an excuse. Having teachers relentlessly talk down SL isn't helpful though. In my view there's a danger that the whole concept of virtual worlds suffers collateral damage as a consequence. Moreover, people will use it as an excuse to reinvent virtual worlds with fewer affordances than SL ("hey, fantastic, no avatars in my VW!!" Yup, I've seen this already). It's great that your students had a largely positive experience but you seem anxious not to portray it as such. Please don't portray me as a LL apologist -- every chance I'll be on ReactionGrid this time next year. A VW evangelist, certainly.

Overall, the students' experiences have been positive. And the class is positive that they won't be back when the semester ends because SL is hard to master and has a bad image, if it has any image at all among 18-22 year olds.

I'll write soon about how students found that traveling with a few friends made SL a lot more fun for them. Yet that has not been enough to retain them in the past 2 years. Of 100 students who I've taught, 2 still log on.

Can you say, "recipe for insignificance?"

I don't see you as an apologist, but I maintain that SL has a terrible image problem. I did not "go fishing" for critiques by students.

And whatever I say critical of Linden Lab, I never talk down SL or virtual worlds--they can provide amazing opportunities for immersive learning, and that is an issue quite separate from SL's public image.

Oddly, I am quite OK with the situation you describe, viz the use of SL for educational purposes and the rest of creation for getting a life. If and when avatars in SL or elsewhere acquire a degree of normalcy, your students will be well-placed. In the meantime I am sure it's something they will always remember, even if they choose for it not to endure.

Repairing that image will be difficult if not almost impossible since when there is media coverage of SL we all know how it will look like.

The investment for such an image campaign will be quite large in my eyes and judging from what I read lately it seems more to me that LL is on a sell out tour to make as much money with SL as possible as long as they are the only alternative in their segment.

It's really surprising that SL has so little resonance among the young, and so much among older people who might have been expected to be less comfortable with technology and social innovation. It puzzles me that SL is said to be difficult to learn, yet the equal or greater difficulty of WoW or games like Dragon Age is not felt to be a problem. In short: yes, the Lindens have some work to do.