Trouble in a Real-World Invented World 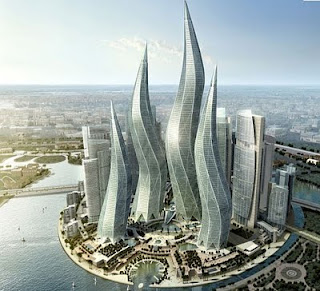 It took a while to convince myself that these buildings, "inspired by the movement of candlelight," were not right out of Second Life. With its indoor ski-runs in the middle of a desert, the 800-meter-tall Burj Dubai, and plans for a 1,200 meter-tall building, it's easy to mistake the U.A.E. city for something out of a virtual world.

Now, the candle that Dubai lit is flickering.

In the Gulf, oil remains the regions' source of income, though states like the U.A.E. and Kuwait, already sensing the aging of the region's oil fields, struck off into a different direction. Like my ancestors in Lebanon, these Arabs understand the power of becoming hubs for trade, banking, and, in Dubai's case, high-end tourism. And they have, one hopes, learned from my relatives' experience to avoid sectarian warfare.

It seemed reasonable. But Dubai, as one observer puts it (see his slides below) has become "a city on crack."

The crisis in Dubai has real-life consequences for developing markets and many wealthy individuals whose fortunes or failures I'd normally shrug off. Dubai teems with the sort of megarich who buy artificial islands or put their condos in 800-meter tall skyscrapers. As Fitzgerald reminded us in another era, "Let me tell you about the very rich. They are different from you and me."

Now they too may get to see how the other 99.5% lives. One gets a sense of how wild the changes in Dubai have been, and how like a virtual world it appears, from this comparison of images. Too fragile to sustain? Too hyped and fevered, like the virtual worlds that flicker on our monitors?

I learned a shortened version of this Dubai proverb when I was a younger:

Sheikh Rashid bin Saeed Al Maktoum's saying may well come to pass. Dubai would look interesting in ruins, like some alien city from an SF novel. Let's hope we never see this future. It won't bode well for the rest of us.
Posted by Iggy O at 1:16 PM