There's no handy generational label for those of us who, as kids, got a dose of 60s optimism that turned sour and dirty in the Malaise Era. We were, as tykes, promised vacations on the moon and jet packs. I'm still waiting, Dr. Von Braun. Then we found out the good doctor had built V2s with slave labor for Hitler's government.

I am proud to call myself a Gen Xer, though, technically, I should be a Boomer thanks to being the last-born of GI-era parents. Yet, if, like me, you came of age in the 70s, you really don't count as a Baby Boomer. After all, Boomers got the muscle cars, the good drugs, Woodstock, the free love. Gen X got the Ford Pinto, "Just Say No," disco, and HIV/AIDs. At least we had punk, grunge, and goth: the music of the disaffected.

As part of a generation that grew up hard and cynical, I worry when I hear clever members of my cohort wax poetic over the future of virtual worlds. We are, after all, their core audience: my Millennial students are too busy augmenting their real lives with constant contact via social networking to want to become a vampire lord, dragon, or Steampunk villain.

First, There.com is closing its doors; with a PC-only client, it was no place I ever went, but it did meet some of the guidelines I have long felt essential for a virtual world's mass adoption. Users with modest Windows systems would use There, not only those of us with fast machines and connections. I do, however, agree with "Eddi Haskell" (that puckish wag) in the comments about this at New World Notes:

Without sex, high end content creation, or some other activity to do, virtual reality in its current manifestations is not going to hold on to large audiences for an extended period. I am actually beginning to think that Blue Mars might not make it now because of the lack of usage- no one seems to be there except bots. I put on money on Second Life for making it long term.

Second whammy, specific to faculty users: Sarah Robbins, aka Intellagirl Tully in SL, noted in our Roudtable on March 2 that she, like me, believes that VWs would never attract mainstream faculty. Her reasoning and mine differ. Sarah finds that "faculty fall into a certain type. we like to show off. You can not show off or impress with qualifications" in SL.

I agree that faculty love to show off. I'd fall back on my major claim that the lack of real-world incentives and rewards stymies faculty engagement in virtual worlds, as does the difficulty of SL's and OpenSim's client software. My thinking along these lines has recently been influenced by reading "Press Enter to 'Say': Using Second Life to Teach Critical Media Literacy," by Jennifer deWinter and Stephanie Vie. They note that unlike games, where play is goal-oriented, in virtual worlds:

Players must learn to adapt to their environment, co-exist with other players, and demonstrate mastery of the game controls and rules. Instead of presenting the user with a pre-deﬁned set of activities, however, this virtual world allows users to deﬁne their own goals through open play.

Will "open play" be enough for mainstream users? Will the curve be too steep for mainstream faculty? I'd say "yes" and "yes," but some developments in computer graphics or client friendliness may prove me wrong. At least, with the recent changes to Heritage Key, I do see one virtual world developer understanding that goals and rewards motivate players. 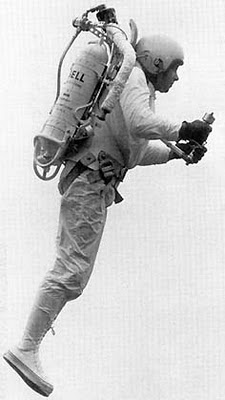 For academic researchers, the future looks bright. We already have years of data to mine. Sarah noted that when she began her PhD thesis, there were only three peer-reviewed articles on virtual worlds. That has changed, and even though there is no There there today, we have many other worlds to research. I just hope that for those who really are attached to 3D immersive virtual worlds, the attachment does not blind to their niche appeal for the foreseeable future.

Soon I'll run the transcript of all of Sarah's meeting with our group.

I'm not Dr. Von Braun, thank God. So I won't promise my fellow Xers a virtual jet pack. That is Linden Lab's job.
Posted by Iggy O at 5:41 AM

"Once the rockets go up,
who cares where they come down?
That's not my department,"
says Wernher von Braun

@Lalo...OMG someone else knows that song!

A man whose allegiance is ruled by expedience

Call him a Nazi, he won't even frown

But I need to eat my tophat...if you saw the post at NWN about Stanford's project to do 3D VWs in a browser, maybe we WILL get our jetpacks and flying cars!

Oh, and did you notice who's heading up that Stanford project? Henrik Bennetson, the coiner of the "immersion/augmentation" paradigm (which I deconstructed here, and reconstructed here).

Lalo, I noticed and need to read your responses, as I'm writing an article that makes note of the binary.

Hey! You may get a citation and be read by tens of people...ah, academe.