Virtual Conferences: A Sense of Place?

Location: Back Home From CCCC

One thing a virtual conference lacks, when the event ends, is a sense of place. I don't get up from my laptop to find a new city outside my window. But universities don't pay conferees to enjoy a new town.

At the end of VWBPE, Linden Labs reclaimed the sims where we had met. It would be like Louisville rolling up the convention district as soon as we all left town. Fat chance of that: one conference after another rolls into town. There are even bars that remember writers like to drink (and Louisville has many bars). I really enjoyed seeing "Welcome National Council of Teachers of English!" in front of drinking-holes. I sampled a few very fine small-batch and single-barrel Bourbons that I cannot find in Virginia.

The weirdness of a typical convention-center district, however, never fails to strike me: it seems as artificial as any region of Second Life. I have to escape and find the "real town" after about a day of prowling a convention-center's habitrails and ficus jungles.

When I go to conventions alone, I drink less, however, and I tend to see more sessions. That still leaves a day or two with free time to explore. So seeking to avoid the drunken part of schmoozapalooza, I skipped the big publishers' parties to drive, with a Steve Earle / Del McCoury soundtrack blaring in my rented Pontiac, to Owensboro, KY, to the legendary Moonlite Barbecue Inn to once again taste the late Pappy Bosley's finest recipes: Burgoo, hickory-smoked mutton, pulled pork, and the "very hot sauce."

I won't digress any more about barbeque, but if someone named "Pappy" is involved, I tend to show up. Driving back, with XTC keeping me company, I got lost in the "hill-hopping" territory of Southern Indiana. Get a powerful car, drive fast, and you'll see what I mean.

It's lovely and un-ruined land, far different from the hideous suburban nowhere that has devoured everything around the Moonlite. Back in that part of the Hoosier State for the first time since 1991, I found myself making wrong turns, and not really worrying. I was near some old-stomping (and hunting and fishing) grounds of mine near the towns of Jasper, Paoli, and--my favorite--Santa Claus.

The small farms and woodlots were lovely, the little hamlets looking trim and sedate, just as I remembered them from 20 years ago. I took extra time to soak up a place that I've lost, albeit for some bittersweet reasons. 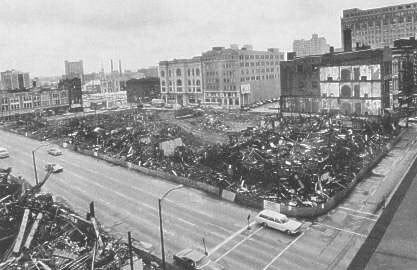 I also got time to see downtown Louisville beyond the bland convention district and its surreal mix of (this week) of writing faculty, National Guard Field Artillerymen, math teachers, and indoor-archery competitors carrying bows and arrows. Heading south on Fourth Street, I came to that human-scale, older Louisville that got bulldozed closer to the river, all to make room for the office blocks and crappy 1980s monoliths that will soon be unlivable as easy oil and convention travel dwindle. The image, "clear-cutting Louisville," is from the Old Louisville Web site. An ugly Hyatt hotel sits there now, with the sort of circular top-floor restaurant that looks like a disco-era flying saucer had landed and stayed past the decline of spandex pants.

In the surviving part of Old Louisville I found D. Nalley's, a 1950s type of diner that only takes cash and serves groaners of breakfasts for under $4. On the way back, I admired the sporadically gentrifying area of urban lofts, local shops, and more: the walkable, bikeable, infrastructure we'll use when the suburbs begin their terminal decline in a few years. Louisville, like downtown Richmond, has too many surface parking lots, but we can rip them up for urban farms to feed ourselves soon, as I suspect we'll need to do under the economic effects of global oil depletion.

I learned a great deal about the urban planning of a city very much like my own. But we call that a vacation, not work. I stopped to oggle the hideous new library, a 1970s stack of slabs that looks very much like the one that crash-landed in Richmond. At the same time, Louisville had the good sense not to tear down the marvelous Beaux-Arts building that was there before someone let "progress" loose on the area.

Sadly for my explorations, I had to get back to go to a morning session, so I trudged past the gutted Moorish-styled Falls City Theater Supply Company and the Modernist Kentucky Typewriter building. I was in paradise...and not just because I'd found a Lebanese deli. I was seeing a past that points the way to a humbler, locally made, and sustainable future. Louisville was clearly a raucous river city with lots of booze and theaters once. It will be a nexus for trade again on this big river, and without as much technological spectacle, future Kentuckians may be typing hand-bills for live shows to entertain those folks who "come to the big town."

This is the first CCCC where a participant looked at my name tag and said "you are Iggy."