No Flying, But No More Death By Powerpoint: The ProtoSphere Virtual World 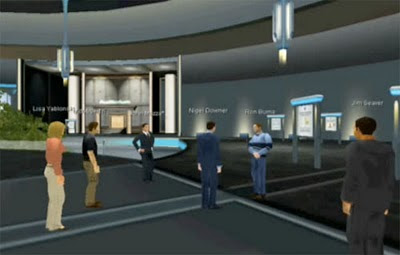 A business-only virtual world that makes meetings of hundreds of avatars possible? Sure--give Linden Lab $55,000 for SL Enterprise. That sounded like a large chunk of change until I ran across a competitor's impressive product, ProtoSphere.

At $100 to $250 per user, it promises to cost a lot more than the Linden solution, so perhaps we casual and educational SLers should not gripe so much about expenses.

ProtoSphere already claims to provide more than SL Enterprise has on offer, and without SL's larger and not-so-savory reputation. Of interest to me is how ProtonMedia's CEO Ron Burns touts the virtual world as more immersive and inclusive than video conferences, noting that participants are remarkable honest when communicating as an avatar. He claims too that "There is [sic] no self-conscious video telepresence video artifacts here."

There is that, for the poor readers who have bad-hair days. Note to self: every day for me is a no-hair day, so I'm set for either world.

Maria Korolov at Hypergrid Business also points out that unlike SL Enterprise, there is no content generated by end users, and that the company does the building for clients. This may account for the price, going upward with the degree of customization and content creation that is required." For for a 500-user world, the fees might begin at $50,000, right in the range of SL Enterprise.

Selling points to companies are not new ones: lower travel costs, prototyping, and so forth. But ProtoSphere is primarily for meeting and exchanging materials. I'll focus on how it differs from existing virtual worlds we use for education and socializing.

First is anonymity. "Every user in Protosphere has their own social network profile," Burns states, so the company has reached a point Linden Lab strives to have for its business clients: full transparency to real-world identity.

Second is document sharing, a holy grail for educators in SL. The little kiosks for document-sharing in-world seem rather nifty to me, working like diner juke boxes to scroll through available materials.

Microsoft is a partner in this venture, so ProtonMedia has a major-league backer for their virtual-world client. Of course, MS is also active in Reaction Grid; a case that the big boys from Redmond are after several virtual world contenders, with an eye to buying out the most successful developer? This would not be the first time MS has made just such a canny move.

One of the company's FAQs says it all about the distance that Linden Lab needs to travel to cross the gulf established by its reputation in the business world:

What is the difference between ProtoSphere and Second Life?  ProtoSphere is a 3D immersive environment built on the Microsoft stack to address business collaboration needs. SecondLife is a business to consumer 3D online service built on open-source technologies and focused on e-commerce, entertainment and third party development.

Burroughs takes a shot right across the Lindens' (and Avatar Reality's Blue Mars) bows by noting that "The teaming environments created by by our customers in ProtoSphere are strictly for business and will deliver measurable ROI in terms of operational efficiency." So no furries or sex clubs or driving balls 1000 yards at low-g Martian golf courses, I suppose.

A business only world without those things would bore many social ussers, and one without end-user content would bore most educators, but ProtonMedia has made a wise business move. As a marketing professor friend who spent time in SL during the "hype" era said, "there's not any ROI here for traditional businesses." This was only months before the exodus of brick-and-mortar companies from SL began in 2007.

ProtoSphere's makers learned from this and go beyond a "Virtual American Apparel Store" model to what virtual worlds do best: permit old forms of collaboration to exist quickly over great distances. To get an even closer look at ProtoSphere in action, check their video page. A high-definition WMV files can be downloaded; it's where I've taken the screen captures for this post.

Kudos to Rob Kelley, an old friend from grad school who is now a partner and COO at LiquidHub, for telling me to have a look at ProtoSphere.
Posted by Iggy O at 11:33 AM

Thank you, Ron, and good luck with your product. Given how much travel costs business, a stable virtual world for this audience will sell.

I don't foresee fuel costs going down or air-travel being more convenient in the near future.