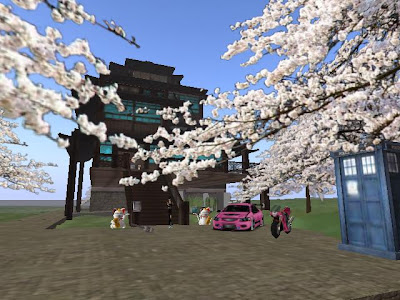 Location: Under the Cherry Blossoms of my home

Generally one would expect that an avatar doesn´t need anything for its existence in SL. It doesn´t have to eat, drink or rest to survive. Actually it wouldn´t even need clothes since it looks like a Barbie or Ken doll and can be clothed in basic stuff by just the click of a button.

Yet virtual worlds are the mirrors of the real world and so virtual clothing is possibly the hottest topic on the grid since the basic stuff quickly gets boring or in case of hair looks gross. So it is no wonder that a large industry around avatar beautification has established itself. Even the hardliners on spending money in SL see a certain sense in these modifications since they help building a unique persona out of the anonymous starter avatars.

Owning land on the other hand is discussed rather fierce. Why should you own virtual land which is in fact just a virtual bit of serverspace to place some polygons onto? I think giving the answer is not that easy. Of course nobody needs an own place since there is no need to retire to rest or something. The general purpose of a place to live doesn´t really apply to SL since the basic usages of a home do not apply to SL. Even redressing can be done without showing too much skin once you have understood it ;)

I have been a landowner from my second month in SL. I started out with a small 1024sqm parcel which had barely enough to put a small house and some furniture into it. From that time on I always lived in some sort of community projects which ultimately ended in the Givenchi Estate which was a whole sim large. After that was given up in early 2009 I came back to a nice hidden parcel in the hilly countryside of a private estate in SL.

But why didn´t I simply stay a hobo? Another good question with an more difficult question. In fact nobody needs land ... me neither and I also think that land isn´t the key to SL happiness, since everything you want can be achieved in the current spaces provided. You can even find the relative privacy of a skybox when you set it up temporarily in a sandbox and shoot it up into the sky. So why own land?

Well I think that the only valid reason to buy your own land is that it gives you the ultimate opportunity to model it the way you want to have it. My current parcel resembles a classical Japanese mansion but has a front yard for my car, my motorcycle and my Tardis ;) The combination of the different styles is only possible because I own that place and can shape it to my own will. Just like the design of the avatars is an expression of myself this whole parcel is shaped to my personal tastes. Since I regularly like to invite friends over and have them around, maintaining this place is definitely worth it for me. This certainly does no apply to everyone else in SL that owns land, but one should always remember that a lot of content done is SL is user generated and not from LL themselves.

One shouldn´t forget that most of the content we enjoy in SL every day is done by individuals or groups of individuals out of pure enjoyment for creating these scenery and only a minority generates revenue. While there is a number of clearly commercially structured zones in SL, I think that most of the non commercial parcels are simply there to give the avatars a focal point. It gives them a place that makes them comfortable and so finally fulfills a basic requirement of a place called home. It is only bits and bites on a server but the bits and bytes behave according to the wish of the owner.
Posted by Tenchi Morigi at 3:54 AM

Thank you, Tenchi. For my part, I'm going to become more observer, less participant, in the flame-war over adult content and return to exploring Armada.

That's what is best about SL; we can build little worlds-within-worlds for our pleasures. As long as it does not hurt our first lives, I see it as merely another pleasant hobby.