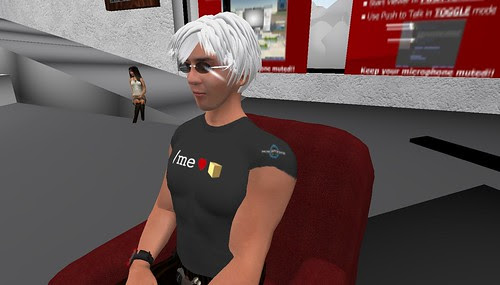 When I had the good fortune to interview Jon Himoff, CEO of Rezzable, our topics touched on SL™ for perhaps a third of our talk. So it's not really fair to say "Second Life® Education Roundtable" this week.

I'll soon edit and place our transcript in an HTML document. It shows where we educators may be headed and why Rezzable made its decision to largely move away from the Linden Lab™ product. I will provide some noteworthy quotations that I'll sum up in my next post. For now, however, a few highlights. These are transcribed remarks from voice, so I'll ask Jon to send me corrections if I've misrepresented his remarks or taken them out of context too far:
Himoff envisions parts of Heritage Key, both their King Tut Virtual Experience and the forthcoming Stonehenge project, working on portable devices. The company envisions a rich set of connections between the 2D Web and 3D "virtual online environments" (a term he prefers to "virtual worlds").

My take on all this: educators are already following Rezzable's example--and were ahead of the firm in many cases--into other virtual worlds and away from the Linden Lab product. For now, it's only a bit of exploring, though Heritage Key is already rich enough in content to be the focus for a class project.
Posted by Iggy O at 4:44 AM

thanks for having me and asking such interesting questions. I hope people found it useful.

FYI, some notes about what I mean about media convergence on our corporate-ish blog http://rezzable.net/convergence/media-convergence-browser-on-tv/