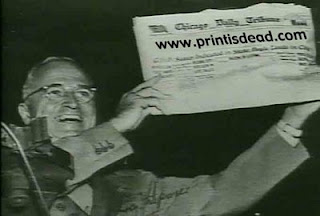 Okay, I cannot resist the German term: the blog now has a German co-author, Tenchi Morigi. Wagner's music is booming from my NPR station, part of "Performance Today," one of the few classical-music programs that does not make me feel that weasels are rending my flesh.

And The Tribune Company has declared bankruptcy. I suspect that many more newspapers in the US will follow. Advertising revenues are tanking, as is readership.

While Second Life has not caused this twilight of the newspaper gods, the virtual world is part of a larger phenomenon that has eroded readership: in North America and Western Europe, we have reached nearly ubiquitous Internet access, at the signal-level if not the socioeconomic level.

Our eyeballs are elsewhere. From games to virtual worlds to Web 2.0 sites, we are too busy to read the paper. Unless one is over 40, commutes by subway (as in New York, where many papers survive) or lives in a rural area without high-speed Internet, I'd wager that news is ever more frequently consumed online.

While newspapers have had a glorious history, their next chapter will feature the survival of a few giants who "get it" online, like the New York Times, or papers that tailor their business models to the new reality, buy news from outlets like Bloomberg, and lay off many of their own reporting staffs.

This is not a healthy development, but it seems inevitable. It's an open question of whether the Net can ever match the depth of good journalism that the US had in its Postwar years or the investigative work done after the 70s. As more and more news outlets turn to "infotainment" to survive, I'm not optimistic.
Posted by Iggy O at 6:11 AM